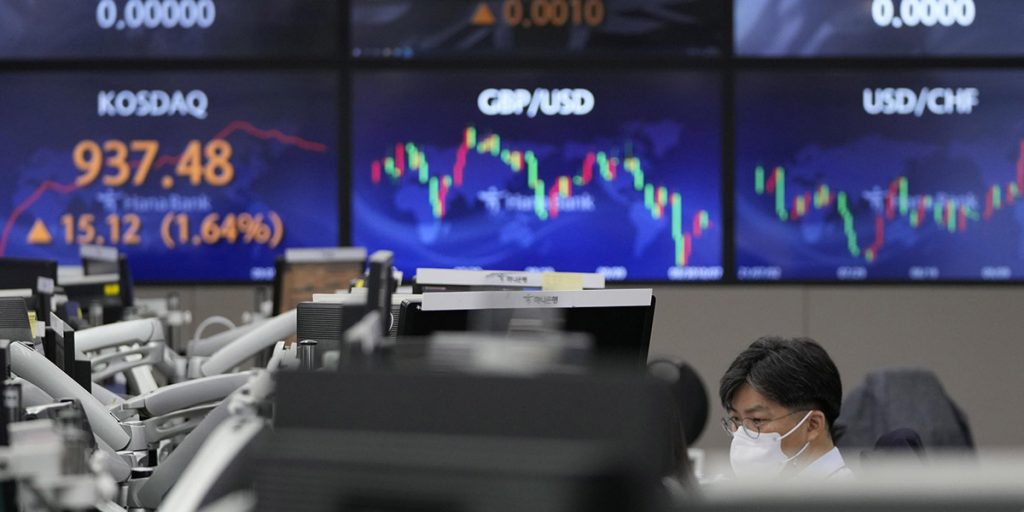 Asian shares rose Thursday, tracking a rally on Wall Street after signs of progress on resolving the standoff in Congress over the debt ceiling.

Stephen Schwartz, a senior director at Fitch, said he believes the regional economy will start to recover with the growing vaccination efforts in Asia, which means restrictions to curb the spread of the coronavirus will get lifted.

But southern and southeastern Asia, where vaccination rollouts have lagged, remain vulnerable to COVID-19 “pandemic-related setbacks.” Recent problems in China’s property sector are another risk, he added.

“Slower growth in China, together with the tapering we expect by the U.S. Fed, could have broader negative repercussions, especially for the region’s emerging and frontier markets,” he said.

Japan’s economic prospects also remain murky as new Prime Minister Fumio Kishida gives his first policy speech later this week. Although he has promised to boost incomes, he has not outlined specifics and is not widely perceived as a proponent of the regulatory and structural changes analysts have long said Japan sorely needs. Some skeptics worry that any new spending will merely push the country into deeper debt.

Kishida has also spooked investors by voicing support for a capital gains tax.

In the U.S., investors are hoping Congress may manage to temporarily extend the federal government’s debt ceiling and buy lawmakers time to reach a more permanent resolution. The market recovered from a morning loss shortly after Senate Republican leader Mitch McConnell offered Democrats an emergency short-term extension to the federal debt ceiling into December.

Financial markets have mostly taken the debt-ceiling drama in stride, expecting yet another 11th-hour solution, but some voices on Wall Street have warned investors recently to make preparations for default, however unlikely, given how extremely damaging it would be for the economy and markets.

The S&P 500 rose 0.4%, to 4,363.55. Gains in technology stocks, makers of household goods, and communication companies helped offset losses in energy and other sectors. About 57% of stocks in the index rose.

If the nation’s debt ceiling, which caps the amount of money the federal government can borrow, isn’t raised by Oct. 18, the country “would likely face a financial crisis and economic recession,” Treasury Secretary Janet Yellen told Congress last week.

During a meeting Wednesday with bank executives, President Biden stressed the importance of Congress raising the debt limit.

“We haven’t failed to do that since our inception as a country. We need to act. These leaders know they need to act.”

The Senate went into recess late Wednesday so lawmakers could discuss McConnell’s proposal, delaying a procedural vote on a House-passed bill to suspend the debt cap.

The latest bout of market volatility comes as investors question the economy’s path forward, amid rising inflation and the ongoing impact of the virus pandemic. Bond yields have remained relatively stable since a sharp jump late last month that signaled concern that high inflation could linger longer than economists and investors had initially anticipated.

High on Wall Street’s list of concerns is the Federal Reserve’s timetable for raising interest rates. The Fed’s policymaking committee recently signaled the central bank could start raising rates late next year. Analysts have said that the Fed could act sooner than expected if high inflation persists.

Investors will get a closer look at how companies fared in the third quarter when quarterly financial results are released over the coming weeks. Wall Street is expecting solid profit growth of 27% for S&P 500 companies, but will also be listening for commentary on how supply chain problems and higher costs are crimping operations.

On Friday, the Labor Department will release its anticipated employment report for September. The labor market has been slow to fully recover from the pandemic and the summer surge in COVID-19 cases further impeded its progress.