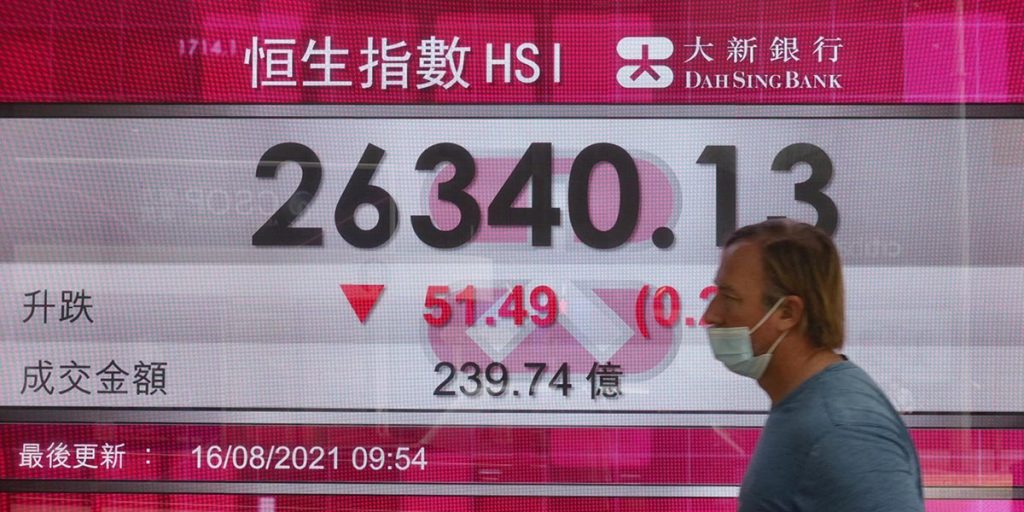 Asian shares slipped Monday, amid worries about surging coronavirus infections in the region, as well as concerns about the long-term impact of the Afghan government’s collapse. Japan’s benchmark Nikkei 225 sagged 1.9% to 27,441.12 in morning trading, while Australia’s S&P/ASX 200 slipped 0.4% to 7,594.90. Hong Kong’s Hang Seng dipped 0.6% to 26,237.92, while the Shanghai Composite added 0.4% to 3,530.45. South Korean markets were closed for Liberation Day, a national holiday. Analysts said the relatively slow vaccination rollouts in Asia are pushing down investor sentiments. Japan, Thailand, and Malaysia are among nations reporting several record daily new cases recently and several nations have seen surges outpace or otherwise hinder their vaccination rollouts.

“This is stretching out already elongated timelines to herd immunity, necessitating periodic lockdowns to stymie rising infection rates,” said Venkateswara Lavanya at Mizuho Bank in Singapore. “Asia remains the epicenter of the spread, with the number of COVID cases in Vietnam, the Philippines, and Thailand rising over the weekend.” Analysts said the Taliban sweeping into Afghanistan’s capital may feel like a faraway event, but will undoubtedly affect markets elsewhere, including Asia. “Yes, markets will try to brush this geopolitical earthquake off: It’s just Afghanistan; It’s a long way away,” said Rabobank in its daily market commentary. “This geopolitical nightmare is almost certainly only just beginning.”

In Japan, the government reported the economy grew at an annual rate of 1.3% in April-June, raising hopes for a gradual recovery from the damage brought on by the pandemic. Some analysts had expected a contraction. Underlining growth were improved private consumption and residential investment, as well as rising exports and imports. Wall Street finished out last week with small gains and new highs for the S&P 500 and Dow Jones Industrial Average. The benchmark S&P 500 rose 0.2% and notched its second-straight weekly increase. The Dow and the Nasdaq edged up less than 0.1%. The S&P 500 rose 7.17 points to 4,468. The Dow added 15.53 points to 35,515.38, and the Nasdaq picked up 6.64 points to 14,822.90.

Stocks in the S&P 500 were nearly evenly split between winners and losers. Gains in technology, health care, and household goods companies outweighed losses by banks, energy stocks, and other sectors. The Russell 2000 index of small companies fell 20.96 points, or 0.9%, to 2,223.11, another sign traders were worried about future economic growth. Also pushing down investor optimism was the University of Michigan consumer sentiment index, which fell to 70.2 from its previous level of 81.2 in July. That was the largest drop in sentiment since April 2020, when the pandemic took its initial grip on the country. The unexpectedly bad drop in the survey’s reading was almost entirely due to the spread of the delta variant of the coronavirus, which has caused hospitals to fill up with unvaccinated patients across the U.S. In energy trading, benchmark U.S. crude fell 80 cents to $67.64 a barrel. Brent crude, the international standard, lost 80 cents to $69.79 a barrel. In currency trading, the U.S. dollar fell to 109.36 Japanese yen from 109.56 yen. The euro cost $1.1798, inching up from $1.1791.