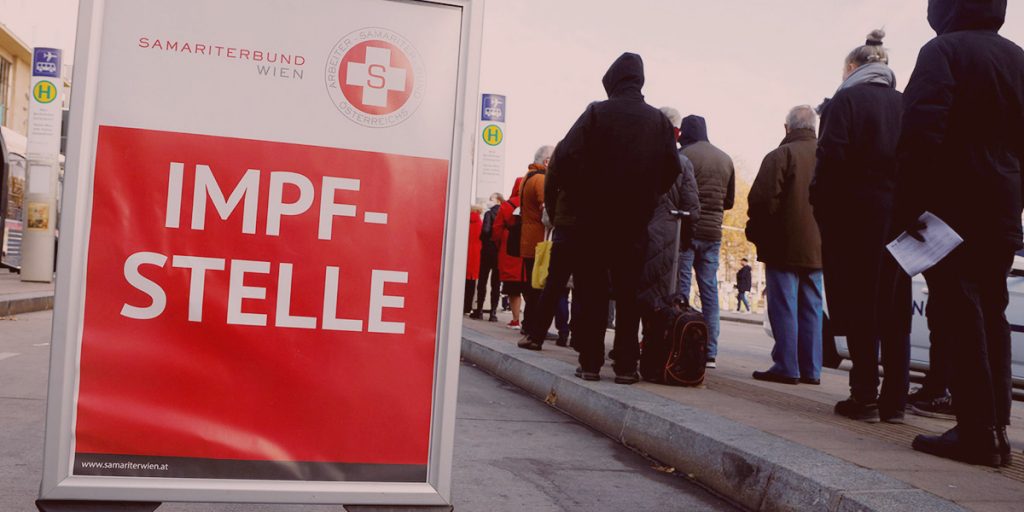 Austria will again enter a nationwide lockdown and Germany is no longer ruling out a similar move as Europe grapples with a brutal wave of the coronavirus pandemic.

“There are too many among us who haven’t shown solidarity,” Chancellor Alexander Schallenberg said in Tyrol after meeting with provincial governors. “Raising the vaccination rate is the only way to break this vicious circle.”

Almost simultaneously with Austria’s announcement, Germany’s top health official said Europe’s largest economy may also need to clamp down harder. Only on Thursday, Chancellor Angela Merkel’s government increased pressure on Germans to get inoculated by announcing plans to restrict many leisure activities for the unvaccinated.

“We’re in a situation in which we shouldn’t rule anything out,” German Health Minister Jens Spahn said in Berlin Friday when asked whether another lockdown was possible.

With available ICU beds at less than half the capacity compared with a year ago and Covid cases continuing to surge, Germany’s health system has become increasingly stretched. Merkel said Thursday that the country faces a “dramatic situation.”

“The whole of Germany is one big outbreak,” Lothar Wieler, the head of Germany’s RKI public-health institute, said Friday at the news conference with Spahn. “This is a national emergency.”

Austria’s across-the-board curbs will start on Monday and last for at least 20 days. They will remain in force after that for people who’ve rejected inoculation, as the government takes a hard line with vaccine dissenters.

Austria’s decision Friday to close all non-essential retail, restaurants, and recreation services are of another scale. This could send consumer services activity back to levels seen in the first quarter of the year when strict containment measures were in place.

Schallenberg, who bemoaned fake news and anti-vaxxers, conceded that his public-health measures haven’t worked. Health Minister Wolfgang Mueckstein apologized for the decision that will send people into their fourth lockdown.

Compulsory vaccination will fall under Austrian administrative rather than criminal law, according to Schallenberg, who said that lawyers have yet to hammer out the details. That suggests people may need to show proof of vaccination from February to clear basic bureaucratic hurdles like enrolling in school and other public institutions.

Such a vaccine mandate would probably be too divisive in Germany, according to Spahn.

“The debate is there,” he said. “But I’m simply even more skeptical because I have a feeling about what it would do to our country.”

European stocks pared gains after the news, with the Stoxx 600 Index trading flat after being up as much as 0.4% earlier. A gauge for the travel and leisure sector declined as much as 1.6%. Deutsche Lufthansa AG was down 4.8%. Germany’s 10-year yields dropped to their lowest since Sept. 22.

Europe has again become an epicenter for the pandemic. Countries in the east along with Germany and Austria — where vaccination rates are relatively low at less than 70% — are especially hard hit. The Czech Republic and Slovakia recently introduced curbs on unvaccinated people, while Latvia was in full lockdown until this past Monday.

Italy is facing an increase in daily Covid cases, which this week passed 10,000 a day for the first time since last May, but it’s banking on a vaccination rate above 85% to avoid new closures.

Prime Minister Mario Draghi’s government has been pressured in recent days by regional governors to introduce restrictions targeted at unvaccinated people, but at the moment adopting these measures is unlikely to be imminent, according to people familiar with the matter.

While the latest restrictions are unlikely to tip the euro area back into recession, they could slow the region’s rebound from the crisis and weigh on economic sentiment. The prospect of further measures will help the European Central Bank push back against attempts to tighten monetary policy too soon.

Governments are also prepared to prop up their economies. Austrian Finance Minister Gernot Bluemel said support packages will be extended until March, making billions of euros available to companies and workers impacted by the new Covid measures.

“This is a very frustrating situation for everybody,” he said.