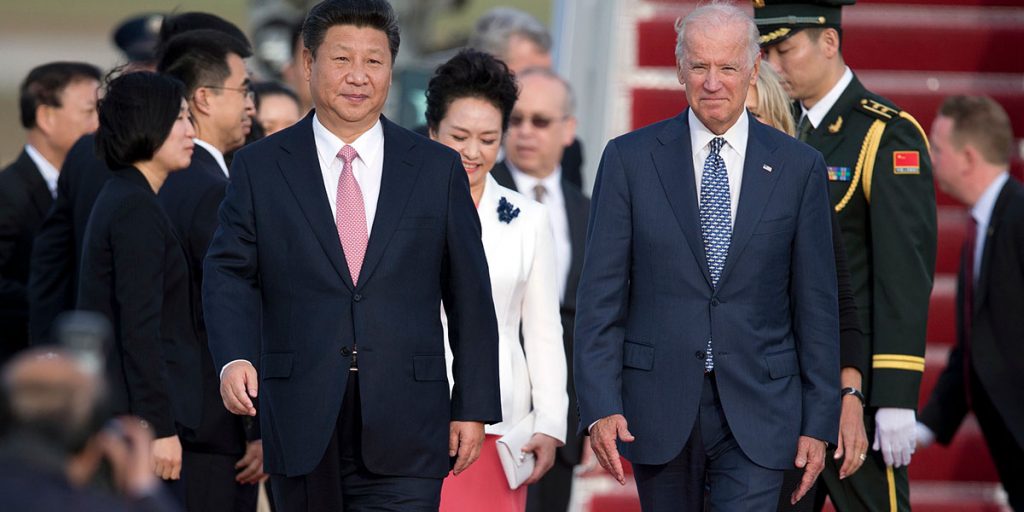 Joe Biden and Xi Jinping spoke of the need for cooperation in their first face-to-face virtual summit, with both sides aiming to stabilize the U.S.-China relationship while downplaying expectations for breakthroughs.

The video conference got underway about 8 p.m. on Monday night in Washington, hours after Biden signed bipartisan infrastructure legislation into law, and ended after more than three hours. The two leaders “conducted full and in-depth communication and exchange on strategic, comprehensive and fundamental issues,” China’s state-run CCTV said.

CCTV reported that Xi said the earth is large enough to accommodate the development of both the U.S. and China, adding that both countries should “not engage in winners and losers.” It also quoted Biden saying the U.S. doesn’t seek to change China’s political system and doesn’t support Taiwan’s independence, restating U.S. policy. The Biden administration has yet to brief reporters.

“I look forward to a candid and forthright discussion,” Biden told Xi at the start of the summit, adding that they had a responsibility is to ensure that competition between the countries doesn’t veer into conflict. The U.S. leader said he planned to discuss human rights, economics, and “ensuring a free and open Indo-Pacific.”

“It seems to me we need to establish some commonsense guardrails, to be clear and honest where we disagree, and work together where our interests intersect, especially on vital global issues like climate change,” Biden told Xi.

Xi started his remarks by calling Biden an “old friend” while saying the U.S. and China “need to increase communication and cooperation.” The two nations should work to find effective responses to global challenges including climate change and the pandemic, Xi said.

“China and the United States should respect each other, co-exist in peace, and pursue win-win cooperation,” Xi said, adding that they should work “to build consensus, take active steps and move China-U.S. relations forward in a positive direction.”

Investors were watching to see if the summit helps defuse tensions that have built up between the world’s two biggest economies over a wide range of issues, including tariffs, sanctions, and human rights. As the summit got underway, the onshore yuan rose as much as 0.3% to approach the strongest level since 2018. The currency fluctuated within a tight range over the past month.

The White House had framed the discussion as Biden’s effort to set the terms of the relationship, with a particular focus on avoiding unintended conflict. Besides mentioning human rights and freedom of navigation in the South China Sea, the president also planned to raise China’s non-market economic practices, such as industrial subsidies, though trade issues won’t dominate the conversation, U.S. officials said.

Chinese Foreign Ministry spokesman Zhao Lijian said Monday that relations are at a “critical crossroads” and Beijing hopes they will return “to the right track of healthy and steady development.” Xi may also press Biden to clarify U.S. strategy toward Taiwan, a self-governed island which Beijing considers part of its territory.

The U.S., China Seeking to Stabilize Ties With Biden-Xi Summit

Xi comes to the summit in a strong position politically, having cleared a major hurdle last week to securing a third term as Communist Party chief next year. The consolidation of power in China makes it only more pressing for Biden to engage Xi in a leader-to-leader conversation, White House Press Secretary Jen Psaki told reporters on Monday.

The Biden administration consulted allies and partners before the meeting and continued coordination is expected afterward as well, Psaki said.

The White House argues that Biden is also coming to the summit with a strong hand, having earlier Tuesday signed into law the $550 billion infrastructure bill that his administration says will boost America’s competitiveness with China.