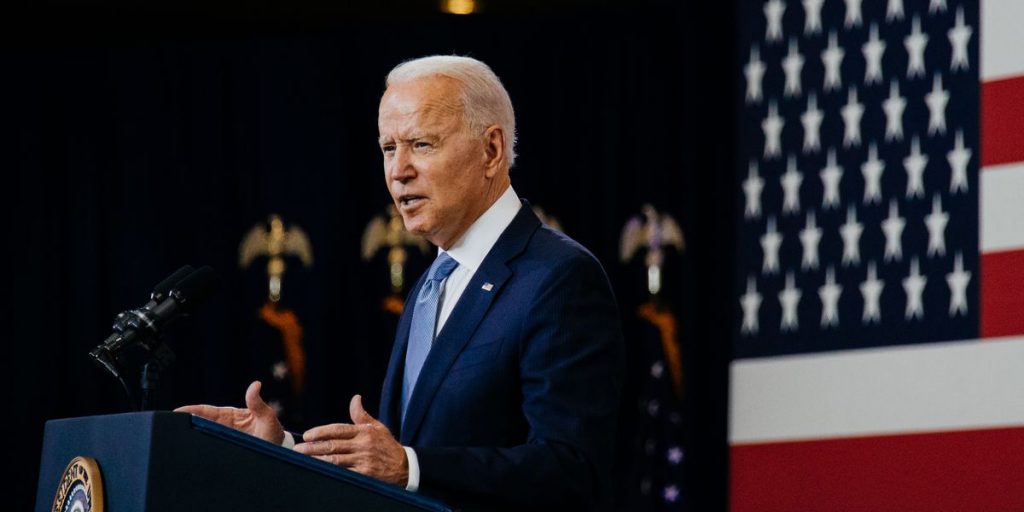 Six months into his presidency, Joe Biden is revealing a hard-edged China policy that suggests relations between the world’s two biggest economies are only going to get worse.

A spate of U.S. actions in recent days — including a planned warning to American businesses in Hong Kong, new import controls for the Xinjiang region and talks about a digital trade agreement that would exclude Beijing — underscore that Biden plans to extend and deepen President Donald Trump’s more confrontational approach.

Biden administration officials say the U.S. strategy is a reaction to China’s own aggressive behavior. That stance will force tough choices for investors and companies caught in the middle of what Biden himself has defined as a defining battle of the 21st century, and may come as a surprise to those who expected a softer touch under the Democratic president.

“It’s very clear that the U.S. under the Biden administration is going to continue with the trend that we saw during the Trump administration and before,” said David Loevinger, managing director of emerging markets at TCW Group Inc. “There’s some disappointment — investors had expected a different approach.”

Beijing officials may have expected a difference, too, after the tumult of the Trump years. But in Washington, Biden administration officials point to a series of hostile actions by President Xi Jinping’s government that they say forced the U.S. hand, adding that the challenge now is to keep the relationship in the realm of competition, not conflict. Recent actions on both sides show how hard that will be to achieve.

China’s leaders have so far shut down any possibility of cooperation on an investigation into the origin of the Covid-19 outbreak, with some scientists saying the possibility of an accidental leak from a Wuhan research facility can’t be ruled out. China has stepped up military incursions into Taiwanese airspace and pressed ahead with a crackdown on freedoms in Hong Kong. The country is even constructing new missile silos in its western desert that suggest it’s building out its nuclear arsenal.

Meanwhile, the repression of ethnic Uyghurs in the Xinjiang region continues and, in a slap in the face to Western investors, Chinese regulators launched a cyber-security probe into Didi Global Inc., the Uber-like ride-sharing app, within days of its $4.4 billion initial public offering in the U.S. That prompted a 24% plunge in the stock.

Senior U.S. officials suggest those actions and others have left them no choice. The officials, who asked not to be identified discussing policy deliberations, said Beijing is denying basic liberties and assaulting Hong Kong’s autonomy after the city spent decades building itself into one of the world’s financial capitals.

At the same time, the U.S. is increasingly concerned that risks to the rule of law, which once only applied to mainland China, now apply to Hong Kong too, citing events such as the closing of the Apple Daily media company, an outlet which cast a spotlight on corruption and anti-government protests in the city.

“The national consensus on getting tough on China is based on one single factor alone: The behavior of the Chinese Communist Party,” said Miles Yu, a former State Department official under Trump. “The Biden team has understood that reality.”

For their part, Chinese officials argue the U.S. is the aggressor, not the other way around. They point to repeated U.S. rollouts of sanctions against Chinese officials and what they call the hypocrisy of lecturing other nations about human rights and the need for democratic reform while grappling with police violence and the Jan. 6 attack on the Capitol at home.

One Chinese official, who asked not to be identified discussing his nation’s strategy, said that U.S. actions regarding Taiwan and elsewhere have played into a widespread belief in Beijing that the U.S. is determined to halt China’s rise. As long as the U.S. refuses to lower its guns, China will do likewise, the person said.

“The Chinese people will never allow any foreign forces to bully, coerce and enslave us,” Xi said in a speech earlier this month. He warned the country would no longer listen to “sanctimonious preaching.”

The Biden administration had long said it is prepared to cooperate with China where it can and confront the country where it must. Now the results of that are becoming clear: marshaling forces with allies, Biden repeatedly sought to raise pressure on China at recent meetings of the Group of 7 leading global economies in the U.K. He’s left Trump-era tariffs in place and looked to further cement close ties with Taiwan.

As with past administrations, Biden is relying heavily on sanctions to seek to impose costs on Chinese officials, though there are few concrete examples of such restrictions changing a nation’s decision-making process. The administration is also looking to further push back — via export and import controls — against China’s repression of ethnic Uyghurs in Xinjiang.

With some allies in Europe and Asia seeking a softer touch, Biden’s team insists that the U.S. isn’t asking other countries to choose sides. Early this summer, Secretary of State Antony Blinken said the U.S. will rely on “innovation, not ultimatums.” But that contrasts with Biden’s own words, such as when he addressed Congress in April and defined the approach to China as a once-in-a-generation battle.

“We’re in competition with China and other countries to win the 21st century,” Biden said. “We’re at a great inflection point in history.”

The battle over ride-sharing company Didi highlights how the U.S.-China competition is entering new spheres, a trend that will present tough choices for companies and nations that may find they can’t do business with both nations at the same time.

Under Biden, the U.S. is still pressing other governments to cut China’s Huawei Technologies Co. from their next-generation 5G telecommunications systems. China has meanwhile offered its homegrown Sinovac Covid-19 vaccine to nations like Paraguay in what analysts say is a bid to get them to ditch their diplomatic recognition of Taiwan.

Battles loom on other fronts too: The U.S. is looking to impose further restrictions on the export of bleeding-edge semiconductor technology to China, and the White House has raised the possibility of an Indo-Pacific-wide digital trade deal that excludes Beijing.

But with two such intertwined economies, some experts see major risks if the tit-for-tat continues.

“America’s leading companies must be in the China market and have access to Chinese innovation in order to maintain global leadership,” said Jim McGregor, China chairman of APCO worldwide. “They can’t be forced into a choice between the U.S. or China. They may have to create structural workarounds with spin-offs or stock listings that provide some separation between U.S. and China operations if things get really dire.”

And despite all the rancor, the data show just how hard it will be to disentangle the world’s two largest economies.

Chinese data show the nation’s merchandise exports to the U.S. are running at a record-high pace so far this year, while U.S. figures indicate a rate well above 2020 but below prior years. Meanwhile U.S. shipments to China are running at or near record levels.

Deputy Secretary of State Wendy Sherman is headed to Beijing by the end of this month, according to three people familiar with the matter. U.S. officials are hopeful that trip will go better than the last time the two sides held a high-level meeting, when Secretary of State Antony Blinken and National Security Advisor Jake Sullivan were subjected to a withering tirade from top Chinese officials at talks in Alaska.

But officials are pessimistic of any significant improvement, especially given the number of high-profile flashpoints looming on the calendar in the next couple years.

Calls are growing for the U.S. to boycott the 2022 Winter Olympics in Beijing, while the midterm elections in the U.S. later that year will only amplify the rhetoric. In China, Xi will likely sharpen his own tone as he looks to further cement his power with a third five-year term as China’s president, a reversal of three decades of policy that limited leaders to two terms.

Biden hasn’t even met Xi in person as president, and officials are undecided how much interaction the two leaders will have at a meeting of the Group of 20 meeting in Rome this October.

At this point, the main goal of such talks would be damage control, according to Bonnie Glaser, director of the Asia program at the German Marshall Fund.

“There will be efforts to put in place guard rails to prevent competition from escalating to confrontation and spiraling out of control,” Glaser said. “That will be a main goal of bilateral dialog.”