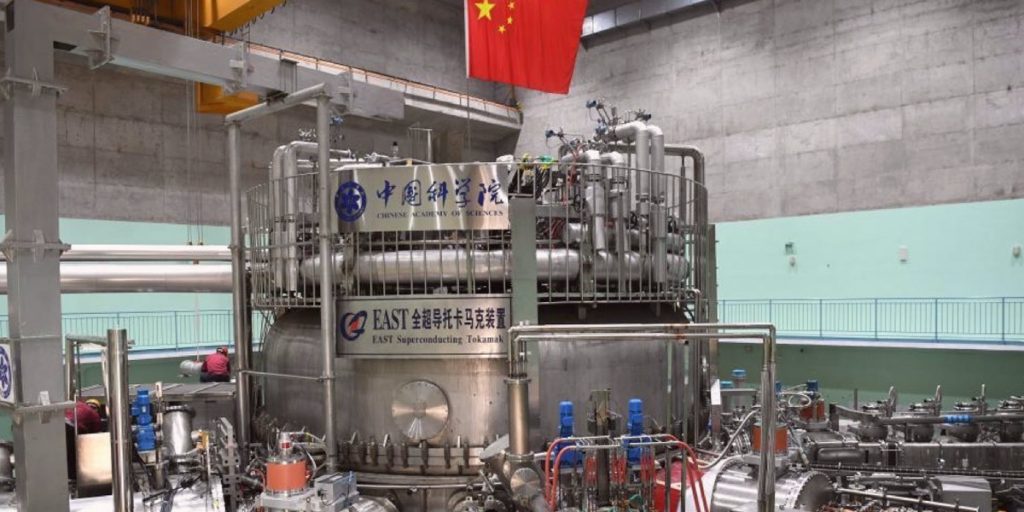 The core of the Sun burns at 15 million degrees Celsius by nuclear fusion of hydrogen nuclei into helium, but now scientists have designed an ‘Artificial Sun’ on Earth that has sustained a temperature of 120 million degrees Celsius. The Experimental Advanced Superconducting Tokamak (EAST) fusion reactor designed by China burns at eight times the Sun’s core temperature.

The reactor broke the record by reaching a plasma temperature of 120 million degrees Celsius for 101 seconds and 160 million Celsius for 20 seconds. Located at the Hefei Institutes of Physical Science of the Chinese Academy of Sciences, the reactor has been designed to replicate the nuclear fusion process that occurs naturally in the sun and stars to provide almost infinite clean energy, Global Times reported.

In a fusion reaction, two light nuclei merge to form a single heavier nucleus. The process releases energy because the total mass of the resulting single nucleus is less than the mass of the two original nuclei. The leftover mass becomes energy.

How does the reactor reach such high temperatures?

In a bid to push for clean energy and reach such high temperatures, hydrogen isotopes are placed inside a fusion device to create a plasma state where ions and electrons are separated. During the process, ions are heated and maintained at high temperatures. China’s EAST reactor had previously reached 100 million degrees Celsius in 2018.

According to Global Times, EAST is part of the International Thermonuclear Experimental Reactor (ITER) facility, which is a global science project jointly constructed by China, the EU, India, Japan, South Korea, Russia, and the US. While the reactor has already made a massive record, scientists believe it will at least take another decade for a fully functional reactor to take shape from the experimental design.

The experimental reactor’s main goal is to create nuclear fusion like the Sun, using deuterium from the sea to provide a steady stream of clean energy. Around 300 scientists and engineers mobilized to support the operation of the doughnut-shaped experiment facility, which includes a vacuum system, RF wave system, laser scattering system, and microwave system, Xinhua reported. Scientists had begun upgrading the experimental reactor for about a year to reach higher temperatures.

The raw material required to generate energy in the reactor is deuterium, which is found in abundance on Earth unlike other non-renewable sources like coal and oil. According to research, through fusion reaction deuterium in one liter of seawater can produce the amount of energy equivalent to 300 litres of gasoline.

While the Chinese reactor has broken the records, it’s not the only one to have reached such high temperatures. Superconducting Tokamak Advanced Research fusion device from Korea had reached a plasma temperature of 100 million degrees Celsius for 20 seconds in December 2020.

Previously, EAST had generated an electron temperature of 100 million degrees Celsius in its core plasma in November 2018, which is seven times the temperature that is experienced at the core of the Sun. The reactor had sustained the 100 million degrees Celsius temperature for 20 seconds in 2020 as well. The experimental reactor first began operations in 2006 and has since been one of the key sources for research around fusion.

With the world switching towards green energy, the fusion reactor once operational could pave the way for a clean source of an unlimited supply of energy.