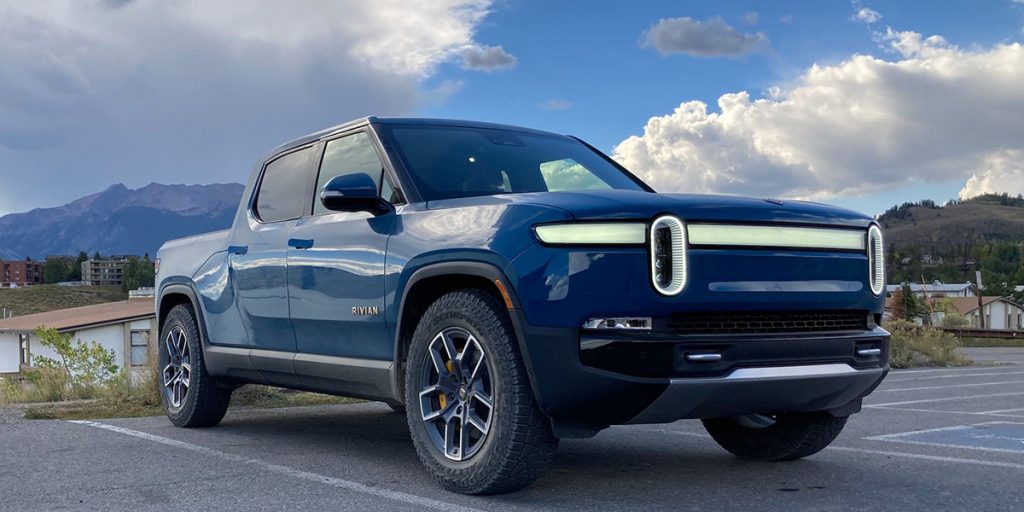 Shares in electric vehicle firm Rivian are set to start trading in New York on Wednesday, after raising about $10.5bn (£7.75bn) from investors.

That’s as the shares were priced at $78 each, according to media reports.

That would make it the largest share flotation for a US company since Facebook’s initial public offering (IPO) in 2012.

Yet Rivian only started delivering its first electric pick-up trucks to customers in September.

And the California-based start-up has made losses of over $2bn over the last two years.

But the van and truck maker has drawn significant investor interest, in part because it already has the backing of online giant Amazon.

And it is has beaten rivals include Ford and General Motors to a segment of the market – small trucks, pick-ups, and SUVs – which is popular with American drivers.

The shares were priced at $78 each, which is above the target range of $72 to $74, according to several media sources.

That would give the company a stock market valuation of as much as $77bn.

Rivian is already being compared to Elon Musk’s Tesla, which transformed the market for electric cars.

Alongside the pick-up truck, Rivian is due to start rolling out its sports utility vehicle (SUV) in December and a delivery van in 2023.

“Rivian exists to create products and services that help our planet transition to carbon-neutral energy and transportation,” said RJ Scaringe the company’s founder and chief executive in the firm’s submission to the Securities and Exchange Commission (SEC) ahead of the share flotation.

“This is what inspired me to start Rivian, and it’s what drives every decision we make as an organization.”

The firm was founded in 2009 as Mainstream Motors, changing in 2011 to Rivian, a name derived from “Indian River”.

Originally Mr. Scaringe pursued the idea of an electric sports car but later changed track to focus on trucks and vans.

Recently Rivian has invested heavily in the production of the R1T which is designed as an aspirational, outdoor adventure style vehicle. It comes with the option of a three-person tent roof attachment and a slide-out kitchen unit for cooking in the wild.

But crucial to investors’ interest is the firm’s relationship with Amazon, which not only owns 20% of Rivian but has also said it will buy 100,000 electric delivery vans from the firm, once the firm starts to roll them out too.

Not so long ago, US investors didn’t have that much time for electric vehicles. But things have changed – and how!

Today, the share price stands at well over $1,000, and the value of the company at more than $1tn.

That may explain at least some of the hype surrounding Rivian. EV businesses are simply hot property these days.

Factor in powerful backing from Ford and Amazon, pickup trucks that look all-American, even if they run on batteries, with commercial vehicles as well, and you can see why the IPO has gathered such momentum.

Rivian is not Tesla. Its products are very different, and deliberately so. But investors are betting on the company one day becoming every bit as disruptive.

Ford has also invested in the firm, as well as working on its electric trucks.

Karl Brauer at ISeeCars.com said there was a lot of excitement around the brand because of the backing it has already secured, and because it presents itself as a premium truck brand.

“I think people have a lot of anticipation because they do feel like there are shades of Tesla here,” he said.

However, he said Rivian’s fortunes could be undermined by an economic downturn reducing demand, or by mechanical or production difficulties.

There is already another cloud on Rivian’s horizon. Its former vice president of sales and marketing, Laura Schwab is suing the company claiming she was wrongfully dismissed after making a gender discrimination complaint about the “toxic bro” culture at the company.

She also says she warned the company its delivery targets were “not achievable.”