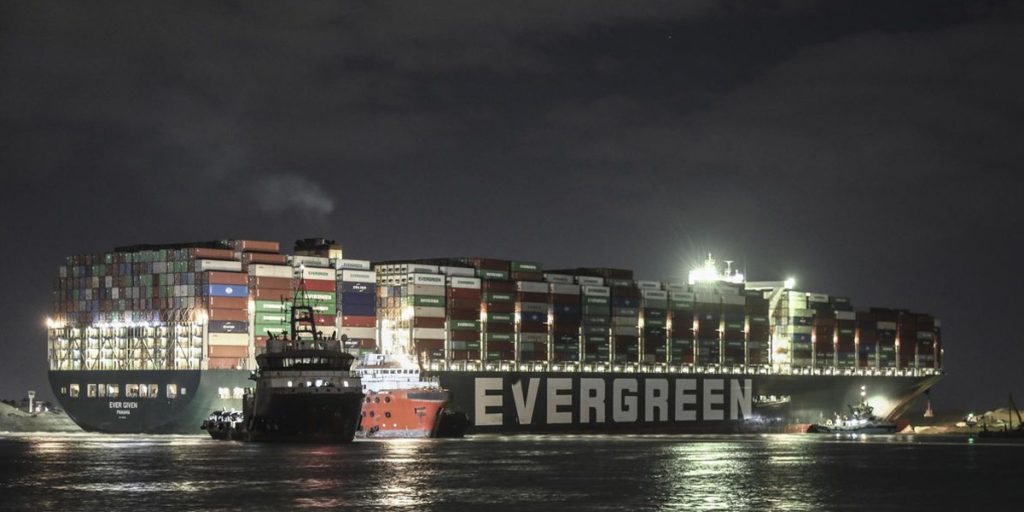 The Ever Given is finally afloat, according to shipping company Inchcape.
After nearly six days of being lodged aground, the Ever Given ship is now afloat. That’s according to Inchcape, a shipping services provider, and ship tracker Marine Traffic. However, the ship being floated may not fix the entire problem, as the giant Ever Given still needs to be maneuvered to free passage through the canal.

The Suez Canal is one of the world’s most important waterways. Located 75 miles east of Cairo, the capital, it links the Mediterranean Sea to the Red Sea, allowing for direct shipping from Europe to Asia. Roughly 12% of the world’s shipping traffic and a chunk of its oil supply goes through the manmade canal, which has become particularly vital following pandemic-related disruptions to shipping.

If the canal’s cargo traffic is disrupted, that means delays in everything from oil to food to clothing to semiconductors. Which is why it’s a big deal that a 1,312-foot-long cargo ship called Ever Given has been blocking the Suez Canal since last Tuesday.

With the waterway blockage entering its sixth day, the fallout is reverberating around the world. But on Sunday night (Monday morning Egypt time), a breakthrough was reached.

The Ever Given was lodged firmly into the embankments on each side of the Suez Canal. Now, after six days of rigorous efforts, the ship has been refloated, according to Inchcape.

“The MV Ever Given was successfully re-floated at 04:30 lt 29/03/2021. She is being secured at the moment. More information about next steps will follow once they are known,” the company tweeted.

It’s a pivitol moment of progress, but the saga isn’t over quite yet. The Ever Given is longer than a skyscraper is tall and more importantly is longer than the canal is wide. It’ll need to be moved around — a tough task — before the 300-plus ships stuck in the canal bottleneck can gain passage.

The vessel’s refloating comes after two additional tugboats were deployed on Sunday, as reported by AP News, to help a fleet of around 10 similar boats extract the 200,000-ton Ever Given. At the same time, the Suez Canal Authority over the weekend deployed more onland heavy machinery working to dig around the ship’s bow, which would make it easier for the vessel to be pulled out.

“If the ship were to remain stuck for another week it could cause massive delays in the delivery of products, and every second of delay leaves billions of dollars’ worth of disruptions on the line,” Jennifer Bisceglie, CEO of supply chain risk management firm Interos, said to CNET on Friday.

Peter Berdowski, CEO of Boskalis, the company leading the rescue effort, cautioned on Thursday that the Ever Given being stuck for weeks is a very real possibility.

“We can’t exclude it might take weeks, depending on the situation,” Berdowski told the Dutch television program Nieuwsuur. “It is like an enormous beached whale. It’s an enormous weight on the sand.”

Shoei Kisen Kaisha, the company that owns the Ever Given, released a statement Thursday apologizing for the issue. Meanwhile, the US government has offered assistance to the Suez Canal Authority.

“In connection with the ongoing efforts to dislodge the container ship that ran aground during its passage through the Suez Canal, the Suez Canal Authority values the offer of the United States of America to contribute to these efforts,” the SCA said in a statement, “and looks forward to cooperating with the U.S. in this regard in appreciation of this good initiative which confirms the friendly relations and cooperation between the two countries.”

Wait, what happened on Tuesday?

Ever Given is a 200,000-ton cargo ship that spans a quarter-mile, roughly the length of four football fields. You’ll notice “Evergreen” is written across its body but, confusingly, that’s branding for the Taiwanese company that operates the ship, Evergreen Marine Corp.

On Tuesday, just before 8 a.m. Egypt time, strong gusts of wind knocked it off course. En route to Rotterdam from China, it was holding around 20,000 shipping containers of cargo, estimated to be worth $9 billion, when it became wedged in the canal’s east bank.

“The accident is mainly due to the lack of visibility resulting from bad weather conditions as the country passes through a dust storm, with wind speed reaching 40 knots,” Suez Canal Authority’s Rabie said in a statement.

No one on board was injured, according to the ship’s technical manager, Bernhard Schulte Shipmanagement. But the task of extricating the Ever Given is momentous. The ship was wedged diagonally — as you can see in the above aerial shot — and is longer than the Canal is wide. The ship spans 1,312 feet while the Canal’s width ranges from 205 to 225 feet.