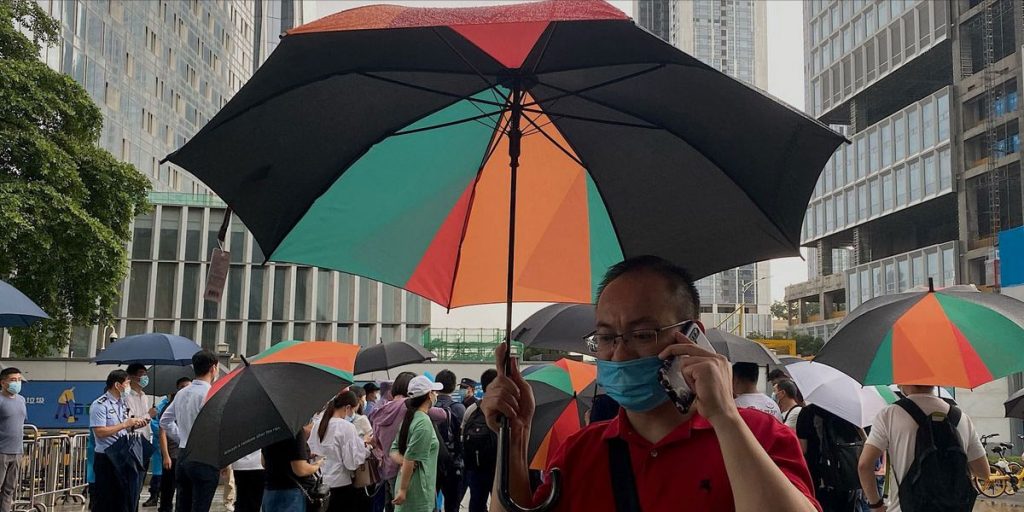 Shares in the highly-indebted Chinese property giant Evergrande have plunged after it outlined the extent of its financial problems.

The firm said it is struggling to sell assets fast enough to service it’s massive $305bn (£220bn) of debts.

A statement issued by the company also said that its cash flow was under “tremendous pressure.”

The announcement came just hours after angry protesters besieged the company’s headquarters in Shenzhen on Monday.

In the statement to the Hong Kong Stock Exchange, Evergrande blamed “ongoing negative media reports” that “have dampened the confidence of potential property purchasers”.

The world’s most indebted property developer also said it was working with financial advisers to explore solutions to its problems.

Evergrande shares ended Tuesday’s trading in Hong Kong down by almost 12%. The firm’s shares have fallen by more than 80% in the last six months.

On Monday, dozens of investors staged a protest at the firm’s headquarters. They called on the company to pay back loans and financial products, and chanted: “Give us our money back.”

They were met by scores of uniformed security guards, as well as a company representative who read out a proposal for repayments, according to news outlet Caixin.

Also, on Monday, Evergrande said speculation about its potential bankruptcy and restructuring was “totally untrue.”

Why is Evergrande’s debt problem important?
Evergrande, one of China’s biggest real estate developers, has raised concerns that it will be unable to repay investors.

Its debts, in the form of bonds, have been repeatedly downgraded by rating agencies over concerns over how it has struggled to raise the money to meet repayments.

Some analysts have suggested that the company’s debt problems could pose widespread risks to the financial system of the world’s second-largest economy.

As the firm struggles to sell assets quickly to avoid defaulting on its liabilities, there are concerns that other heavily indebted developers may also be seen as at risk.

Evergrande’s troubles have also caused other concerns for the wider Chinese economy, as hundreds of housing projects remain unfinished and more than a million people are waiting to move into new homes.

What does Evergrande do?

He grew the company from being a small local firm to a property giant, mainly using borrowed money.

Evergrande Real Estate currently owns more than 1,300 projects in more than 280 cities across China, according to the company’s website.

Mr. Hui has a personal fortune of around $11bn, according to Forbes.