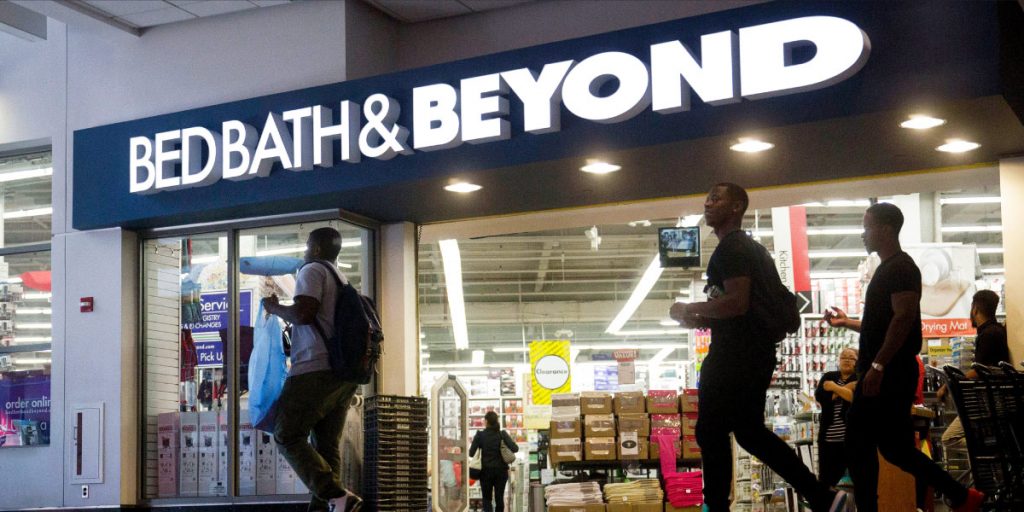 The home goods retailer’s gross margin fell 640 basis points to 30.3% from 36.7% in the year-ago period, according to a company press release.

Bed Bath & Beyond swung into the red, reporting a net loss of $73 million from a profit of $218 million last year.

With the delta variant of the coronavirus continuing its spread across the country, Bed Bath & Beyond experienced “unexpected” traffic declines as consumers shied away from physical stores.

This was particularly prevalent in the retailer’s stores in Florida, Texas, and California, which account for a large portion of overall sales, CEO Mark Tritton said.

According to data from foot traffic analytics firm Placer.ai, Bed Bath & Beyond faced a 23.1% decline in-store visits in July compared to the same period in 2019. At the same time, visits to HomeGoods and At Home were up 28.6% and 16.9%, respectively.

But aside from COVID-related impacts, Tritton said visits to stores declined in part because the retailer significantly pulled back marketing vehicles, like mailed coupons, which have historically been big traffic drivers.

“One of the critical missteps we had during the quarter was really that we pulled back key vehicles that have been traditionally strong traffic drivers for both digital and stores,” Tritton said on a call with analysts Thursday. “Engaging customers with coupons, and that was the reduction in circular, which was dramatically cut and we didn’t get clarity on that until much later in the quarter and it had a real impact on traffic.”

Nonetheless, the retailer during the quarter made progress in its three-year turnaround plan, which it initially announced last October.

Bed Bath & Beyond repurchased 3 million shares during the quarter and is about 20% through its share repurchase program. It also remodeled 70 stores in the period, partnered with Ryder to modernize its supply chain, and launched six of the eight owned brands it plans to roll out by February.

To the latter point, the retailer said it has exceeded its private-label penetration goal for the fiscal year, with the brands performing even better within the retailer’s recently remodeled stores. The company is on track to launch two more private labels in Q3.

“As always with turnarounds, our paths will be dynamic, but we’re confident and committed to our three-year goals and beyond. Our foundation is strong strategically, operationally, and financially,” Tritton said. “With our strategy in play and the hard learnings from Q2, we are well-positioned to continue delivering on our transformation. We have the plan, the team, and the capital to unlock our potential.”