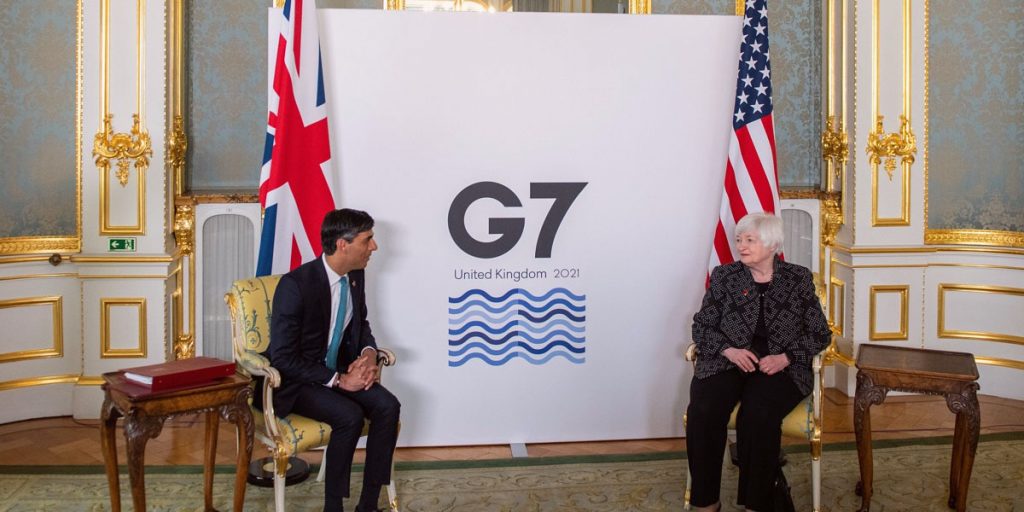 The G7 group of leading economies has reached “a historic agreement” to reform the global tax system to make it fit for the global digital age.

Speaking outside Winfield House in London’s Regents Park on Saturday, the US Treasury Secretary Janet Yellen said the minimum rate of at least 15 percent would end “the race to the bottom in corporate taxation”.

In a tweet later, she added that global minimum tax would end the race-to-the-bottom in corporate taxation, and help the global economy thrive, by leveling the playing field for businesses and encouraging countries to compete on positive bases, such as educating and training their workforces and investing in research and development and infrastructure.

“Today G7 Finance Ministers and Central Bank Governors chaired by Chancellor Rishi Sunak agreed on a landmark deal on global tax, and ways to build a strong, sustainable, balanced and inclusive global economic recovery,” the G7 said in a tweet.

A G7 statement said: “We strongly support the efforts underway through the G20/OECD Inclusive Framework to address the tax challenges arising from globalization and the digitalization of the economy and to adopt a global minimum tax.

“We commit to reaching an equitable solution on the allocation of taxing rights, with market countries awarded taxing rights on at least 20 percent of profit exceeding a 10 percent margin for the largest and most profitable multinational enterprises. We will provide for appropriate coordination between the application of the new international tax rules and the removal of all Digital Services Taxes, and other relevant similar measures, on all companies.

“We also commit to a global minimum tax of at least 15 percent on a country by country basis. We agree on the importance of progressing agreement in parallel on both Pillars and look forward to reaching an agreement at the July meeting of G20 Finance Ministers and Central Bank Governors.

“I am delighted to announce that the G7 Finance Ministers today, after years of discussions, have reached a historic agreement to reform the global tax system to make it fit for the global digital age and crucially, to make sure that it’s fair so that the right companies pay the right tax in the right places,” Sunak said in a video clip posted on Twitter.

“And that’s a huge prize for British taxpayers. This is a very proud moment and I want to thank my G7 Finance Minister colleagues for their collective leadership and for their willingness to work together to seize this moment to strike a deal of historic significance that finally brings our global tax system into the 21st century,” he added.

In a report, The New York Times said the agreement would also impose an additional tax on some of the largest multinational companies, potentially forcing technology giants like Amazon, Facebook, and Google as well as other big global businesses to pay taxes to countries based on where their goods or services are sold, regardless of whether they have a physical presence in that nation.

It, however, said garnering wider support will not be easy.

Ireland, which has a tax rate of 12.5 percent, has come out against the global minimum tax, arguing that it would be disruptive to its economic model. Some major countries such as China have been quietly tracking the proceedings but are considered unlikely to buy-in.

Finance officials believe that if enough advanced economies sign-on, then other countries will be compelled to follow suit and they plan to exert political pressure on Ireland to join the agreement, the report said.

US President Joe Biden’s administration has been eager to reach an agreement because a global minimum tax is closely tied to its plans to raise the corporate tax rate in the US to 28 percent from 21 percent to help pay for his infrastructure proposal, The New York Times report added.

The G7 includes the UK, Canada, France, Germany, Italy, Japan and the US.

The UK holds the G7 presidency this year.

British Prime Minister Boris Johnson will host the G7 leaders for a summit in Cornwall in South West England from June 11-13.