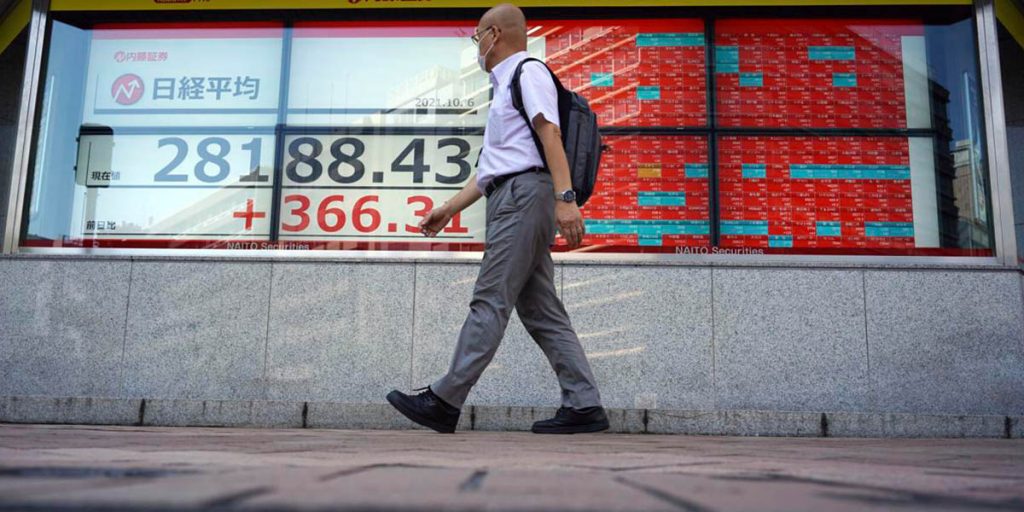 Global shares slipped in cautious trading Wednesday, shrugging off a rally on Wall Street led by technology companies and banks that erased most of the losses from the previous day’s sell-off.

Worries remain in Asia about ongoing coronavirus infections, although hopes are growing that economic activity will return closer to normal later this year, bouncing back from the deep downturn in 2020.

On the risks front, China credit problems and contagion risks have certainly not abated with developer concerns still surfacing. As such, caution has not been thrown to the winds, said Tan Boon Heng of the Asia & Oceania Treasury Department at Mizuho Bank in Singapore.

Troubled real estate developer China Evergrande Group’s risk of defaulting on its more than $300 billion in debt has alarmed investors already worried over the slowdown in China’s growth.

Prospects for Japan, the world’s third-largest economy, remain uncertain. Fitch agency has retained a negative outlook for Japan, citing downside risks to the macroeconomic and fiscal outlook from the coronavirus shock.

Shares fell in New Zealand after its central bank raised interest rates for the first time in more than seven years, removing some of the support is put in place when the coronavirus pandemic began.

The Reserve Bank raised the benchmark rate from a record low of 0.25% to 0.5%. The move came despite a lockdown in Auckland due to a coronavirus outbreak.

The bank said inflation was expected to rise to 4% in the short term before easing to 2% in the medium term.

The market has been choppy for weeks, with inflation concerns driving up-and-down shifts for technology companies and the broader market.

Still, Wall Street is expecting solid corporate profit growth when the third-quarter earnings season kicks off later this month. S&P 500 companies are projected to post a 27.7% increase in earnings for the July-September quarter versus a year earlier, according to FactSet.

In energy trading, benchmark U.S. crude lost 27 cents to $78.66 a barrel in electronic trading on the New York Mercantile Exchange. It gained $1.31 to $78.93 per barrel on Tuesday.

Brent crude, the international standard, fell 26 cents to $82.30 a barrel.