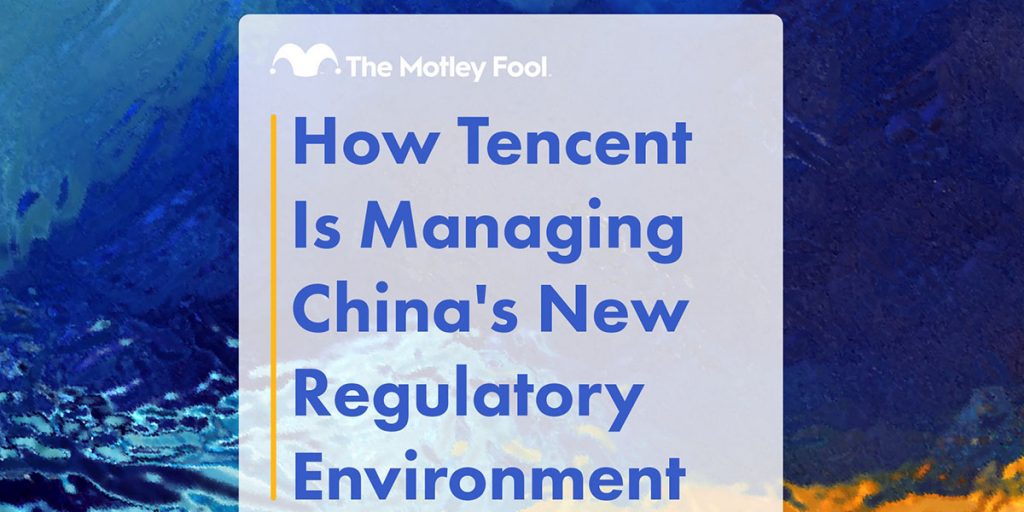 In many ways, Tencent (OTC: TCEHY) seems as if it isn’t as threatened by China’s regulatory crackdown as other big Chinese tech stocks are. The company isn’t traded on a U.S. exchange, and it hasn’t yet faced a significant penalty from the government. Management also appears to be getting out in front of any potential new regulation.

In this Backstage Pass segment, recorded Aug. 23, Fool contributors Brian Withers and Jeremy Bowman examine how Tencent is adapting to the regulatory changes and whether the stock is a buy.

Jeremy Bowman: I think some of the most interesting developments with Tencent happened after the quarter, which was, the company actually suspended WeChat registrations, decided it would do that on July 27 through early August. It said it was doing that to upgrade security technology, but also to stay compliant with relevant laws and regulations. So this is some of the regulatory environment crackdown that we’ve seen. The stock fell 9% that day; that was July 27.

Tencent President Martin Lau also had some interesting comments about the regulatory situation on the earnings call, saying that we should expect more regulations, which kind of spooked investors. But he also, I think, framed it in a larger way, which is important as well, basically saying that globally there’s a trend of regulating internet companies. We see that with Facebook and Google here and in Europe, and there is some noise about regulating Amazon and Apple. So it’s a pattern. Obviously, it’s gotten a lot of attention in China, but I think it’s worth having that perspective that he is trying to give, because in a way, they have the same competitive advantages that we think of as Facebook and Google.

Some of the regulatory framework I think makes sense, and I think you could certainly argue that investors are overreacting, the way a lot of these stocks have fallen sharply in a few months.

Brian Withers: Yeah. Looks like the stock is, wow, 42% off its high from earlier in the year. If you just look at the last year-to-date performance, it’s down 20%, and over one year, it’s down 17%. But you know, if you look over five years, if you just closed your eyes, you’d have had a double. [laughs]

Withers: [laughs] It’s one of those things where it depends on where your perspective was. I remember, I was a Tencent shareholder, and I thought of them as mainly a search company. And you pitched them as a little Berkshire Hathaway and this mobile app. I don’t think people understand all the things that this WeChat can do. We have apps that do about this much, and that WeChat app is just about sort of your daily life. It’s Messenger, plus, like you said, Uber Eats, plus you get your videos, and you may even be able to do your banking on it.

Withers: They have quite a dominant position, and I’m not surprised at all of their reaction to kind of being proactive with the government crackdowns. It’s almost unprecedented for a large tech company to go, hey, we’re not going to take any new registrations for the next 60 days. That’s a pretty substantial movement.

Bowman: Yeah. I think with stuff like that, you have to read between the lines, and maybe they’re trying to get out in front of some regulation that’s coming. It’s hard to know for sure. But to your comment on the Berkshire Hathaway thing, I’ve seen some estimates that their investment portfolio is as much as $250 billion. A lot of these companies that they’ve invested in have really taken off over the last year or two, like Nio or Sea Limited, so they’ve done very well with that as well.

Withers: Yeah. Those are certainly well-known names across the Fool and popular companies to follow. Anything investors should be watching going forward with Tencent?

Bowman: I think, really, the regulatory environment is the biggest issue for most of these companies. So far, they haven’t had any direct consequences, maybe other than removing their app at the end of July there. So I think it might be unfair that the stock’s been punished in the way it has. So I’d keep an eye on the regulatory situation there.

Withers: Yeah, and I think that’s going to continue to unfold. I know that Backstage members have access to — we covered — Ben Ra, Emily Flippen, and Bill Mann covered China for an entire hour. And I read through the transcript over the weekend, and it’s a tremendous piece that talks about sort of what’s going on in China. And to invest in China, I know Ben said, “You don’t just need to be sort of a stock analyst; you need to be a historian.”

Withers: Yeah, and I thought that was really interesting.

Bowman: Yeah. You could unwrap or start peeling away the political environment there. I think the government, we saw crackdown on the education stocks — the government is trying to push against, maybe, income inequality, or they want less of the wealth concentrating in the hands of these big tech companies, I think. Then they’re also pushing to increase the population after they’ve backed away from the one-child and now two-child policy.

Withers: Yeah, so in general, they talked about on the Backstage piece, is that the government movements are really about keeping its citizens happy, and 1.4 billion is quite a tall task. And certainly, there’s a bit of a power struggle between the government and then companies who get larger. And it’s kind of almost the same thing that’s happening in the U.S., as these big tech companies get bigger. We’re talking about stuff going through Congress to limit their power.

Bowman: Yeah, I think it’s very similar, and I would say the Tencent president himself acknowledges that while the regulatory framework has been very loose and some of these companies have really established monopolistic power, it’s understandable why the government would want to increase some regulations. Just like we’re seeing over here, because I think that that’s the nature of the internet, and in a lot of ways it creates winner-take-all markets.

I think for U.S. investors, there’s probably a sort of bias, maybe, against Chinese stocks. The government is different, and there’s a different system there and different rules. It’s scary what happened with the education sector, but I think there’s also a lot of ways that it makes sense what they’re doing.