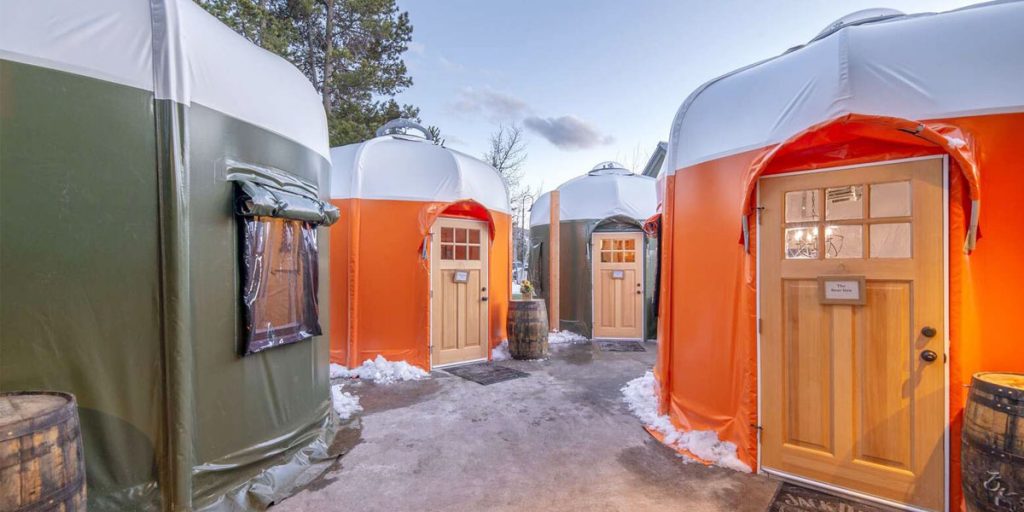 In a year of Zoom, outdoor dining and takeout, Summit County’s entrepreneurs still have found ways to drum up business.

While the intent was simply to survive the pandemic, the new tools businesses used and services they provided are likely to prove useful in a post-pandemic world.

Despite hardships experienced in the business community, the entrepreneurial spirit is alive and well in Summit County. According to town records, nearly as many businesses opened (132) as closed (146) since March 2020.

Restaurants have been hard hit by the pandemic. With indoor dining placed under capacity restrictions or eliminated altogether, restaurants across the country turned to outdoor dining. However, outdoor dining isn’t ideal in Summit County in the winter with subfreezing temperatures and frequent snowfall. But along with takeout, it became the only option when the county went to level red on the state’s dial in late November, closing indoor dining.

Restaurants improvised by adjusting menus to be more takeout-friendly and adding heat lamps and fire pits to outdoor-seating areas. Some restaurants took it a step further with outdoor structures like tents and “bubbles,” in which individual parties could be served.

Sauce on the Blue in Silverthorne and Aurum Food & Wine in Breckenridge invested in yurts for single-party seating.

“We were going to do the yurts originally,” Sauce on the Blue managing partner and owner Tim Applegate said about considering the structures before the pandemic to offer a unique dining experience. “COVID made us do it faster than we were planning on it, but our yurts will be up every October going forward.”

The yurts were set up in early November, adding 24 seats to the restaurant — a significant boost when indoor dining capacity was still limited to 25%.

In addition to expanding the restaurant’s footprint, Applegate hoped they could bring some much-needed revenue — and he was right. The yurts require a special two-hour reservation with a $300 food and drink minimum, a price guests are willing to pay. Applegate said in February that the yurts typically are booked every night.

Applegate said he wanted the yurts to be a high-end dining experience, so each structure has its own theme and is decked out with antique chandeliers and other decor. The yurts are insulated, and each has its own electric heating unit and air filter. There is also a dome in the top of the structures that can open for ventilation between uses.

He said the yurts will continue to serve guests as a unique winter restaurant experience in the years ahead.

“It’s really been fun for the customers and for our staff,” Applegate said.

David “Ax” Axelrod, owner of Highside Brewing in Frisco, also had a business idea that came to fruition during the pandemic out of a need for a new revenue stream. The brewery used to serve its beer to customers only from taps in the restaurant, but Axelrod decided it was time for Highside to start canning.

“With the first shutdown, we ordered the Gosling, which is the canning (system) that we have,” Axelrod said. “(It) is a relatively small, portable one that fits in our space and just gives us the ability to weather the storm in the case of being shut down again. It gives us a source of revenue, a way to keep moving beer.”

During the springtime shutdown, Axelrod said canning beer felt like a necessity. Now that the process is up and running, he said he is focused on bringing canned beer to local liquor stores. The canned beer is also sold to people who stop by Highside’s taproom.

Running the canning operation doesn’t take too much manpower, and the cans themselves are decorated with the work of local artists, who are able to promote themselves by adding links to their websites on the cans. Axelrod said the operation of canning beer will definitely continue after the pandemic.

“It just gets our beer out there and gets our name out there and allows us to reach a bigger audience,” Axelrod said. “We get a lot of requests from people down on the Front Range wanting our beer down there, so it gives them the ability to take four-packs back or cases or whatnot. And hopefully in the future, we’ll expand and be able to get more regularly down in liquor stores on the Front Range.”

Restaurants and breweries weren’t alone in their financial struggles over the past year. Fitness centers were shuttered in mid-March and weren’t permitted to reopen at any indoor capacity until mid-June.

During that time, fitness centers started offering classes online. When centers reopened in the summer with limited capacity, they continued to offer the online classes in addition to limited in-person options — sometimes conducting both at the same time, streaming live classes so that an instructor could teach a single class to a group of in-person and online clients.

Bridget Crowe, owner of Body Essentials Pilates, said she was taking online fitness classes before the pandemic but that she wasn’t sure if it was worth the extra work to host them herself. The pandemic made it a necessity.

Without in-person classes, the only option for fitness studios like Crowe’s was to teach classes via Zoom or another live videoconference service. Teaching online classes proved financially sustainable for Crowe, who said she charges the same price for in-person and online sessions.

When studios could reopen, instructors like Crowe continued to teach online and in-person to cater to clients who were comfortable coming to the studio and those who weren’t. The convenience of online classes quickly became apparent, with even frequent in-studio clients tuning in online when they weren’t able to make it in-person.

Crowe said it wasn’t hard to find the silver lining. She said teaching online has allowed clients who are in the area part-time or can’t make it to the studio to keep up with her classes.

“I actually look forward to those days that I’m on Zoom,” Crowe said. “… I think it’s been a gift to me and to the people that I’m working with.”