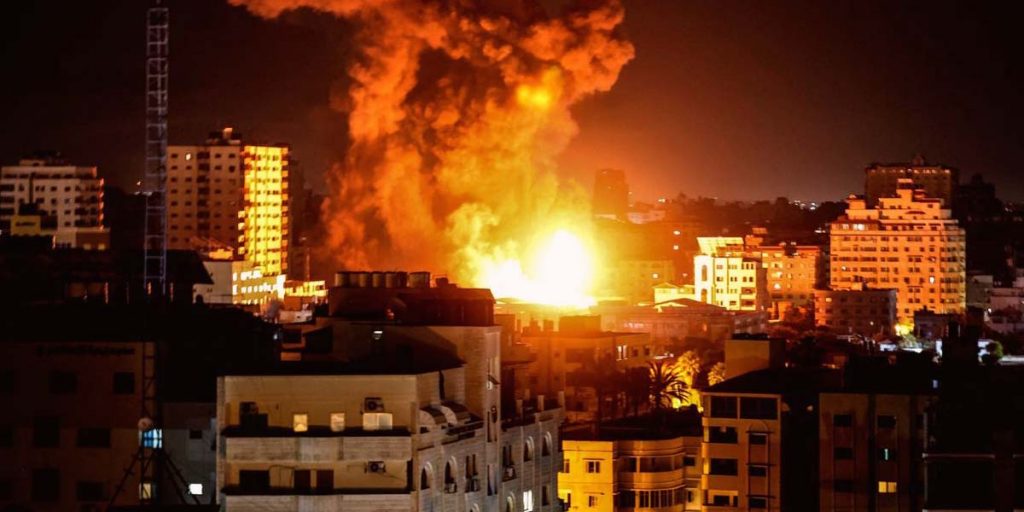 Officials from the U.S., Egypt, Qatar and United Nations are working around the clock to broker a truce in Gaza after more than a week of deadly fighting left more than 200 people dead, but Israel’s leader signaled he’s not yet ready to let up.

Prime Minister Benjamin Netanyahu said Sunday he’ll do “whatever it takes” to restore order after persistent rocket attacks from Gaza sparked Israeli jet strikes in retaliation. He said his goal is to “degrade” the ability of Hamas, which governs the densely populated Gaza strip, to threaten Israel.

“I hope it won’t take long, but it’s not immediate,” Netanyahu told CBS News’ “Face the Nation” in a Sunday interview. “We are targeting a terrorist organization that is targeting our civilians and hiding behind their civilians — using them as human shields.”

Yet Israel drew outrage for targeting non-combatants after it leveled a high-rise building in Gaza on Saturday that housed news outlets such as the Associated Press and Al Jazeera, as well as residential apartments. Netanyahu said Israel warned occupants to evacuate the building, which he said had been used by Hamas’s military wing, before striking it.

Pressed on CBS for proof of how the building had been used, Netanyahu said “we share with our American friends all that intelligence.”

As Netanyahu spoke, Western and Middle Eastern leaders were ratcheting up their diplomatic outreach to resolve the crisis, with little to show for it.

In a shift from statements early last week, Blinken’s readouts of his calls no longer mentioned Israel’s right to defend itself — phrasing that helped spark criticism from some Jewish and left-wing Democrats normally supportive of President Joe Biden’s agenda — but they didn’t suggest any progress either. At the same time, the U.S. was criticized for shielding Netanyahu from some potential public pressure at the United Nations.

The UN Security Council met virtually on Sunday, with many of its members calling for a cease-fire. It was the third such meeting in a week, though the first that was open to the public. And while U.S. Ambassador Linda Thomas-Greenfield said it’s time to “end the cycle of violence” in Israel and Gaza, she singled out Hamas directly, saying it and other Palestinian groups should immediately “halt rocket attacks and other provocations.”

Her critique of Israeli actions was less direct, and didn’t mention Netanyahu’s government.

“We urge all parties to avoid actions that undermine a peaceful future,” Thomas-Greenfield said. “This includes avoiding incitement, violent attacks, and terrorist acts, as well as evictions — including in East Jerusalem — demolitions, and settlement construction east of the 1967 lines.”

U.S. efforts to delay the latest Security Council meeting — which had originally been requested for Friday — and its blocking of a joint statement condemning Israel’s behavior, drew more fire on Sunday, with China’s Foreign Minister Wang Yi calling on the U.S. “to support the Security Council in easing the situation.”

While Biden’s facing more pressure within Democratic circles to speak up and use American influence to get Netanyahu to dial back tensions, there’s no unified response within the party.

On Friday, a dozen Jewish Democrats in the House wrote to Biden demanding that the U.S. address Israel’s “deepening occupation” in Jerusalem. That was in addition to more widespread calls for action from the left flank of the party, which increasingly links Israeli policies toward the Palestinians to calls for racial justice at home.

“If the Biden admin can’t stand up to an ally, who can it stand up to?,” tweeted Representative Alexandria Ocasio-Cortez of New York.

So far, that criticism isn’t enough to give Biden a strong incentive to engage in a conflict that offers few opportunities for success. It’s not much different in Europe, where most leaders aren’t yet ready to stick their necks out for Hamas.

That leaves Netanyahu untethered for now, although “victory” will be elusive. Prior to the fighting that started last week, Israel and Hamas fought three brutal, inconclusive wars.

Hamas, for its part, wants to show it can wreak damage while reclaiming the mantle of the Palestinian movement best able to stand up to Israel.

Gaza militants have fired about 3,100 rockets at Israel since the start of hostilities. The Israeli army has struck some 1,500 targets in the blockaded enclave, going after Hamas’ missile production and launching sites as well as the underground tunnel network for its fighters, Netanyahu said.

“There is full support behind the government even though we are all paying a price,” said former Israeli ambassador to the United Nations Danny Danon, a Netanyahu ally. “Israel will keeping hitting Hamas hard until it begs for a cease-fire.”

Hamas last week signaled it was ready to end this round of fighting. Analysts say the militant group wants to consolidate political gains it’s made over the Palestinian Authority, with whom Hamas has a rivalry for leadership of the national movement.

By standing up to Israel with incessant rocket barrages against a much stronger enemy, the rulers of Gaza have scored points with the Palestinian public as defenders of their sacred city, said Ghassan Khatib, a former Palestinian cabinet minister who teaches political science at Birzeit University near Ramallah.

Meanwhile, the death toll continues to climb. As of Sunday, more than 190 Palestinians in Gaza, including dozens of women and children, had been killed, with more than 1,000 injured. Ten people have died and close to 300 have been hurt in Israel.