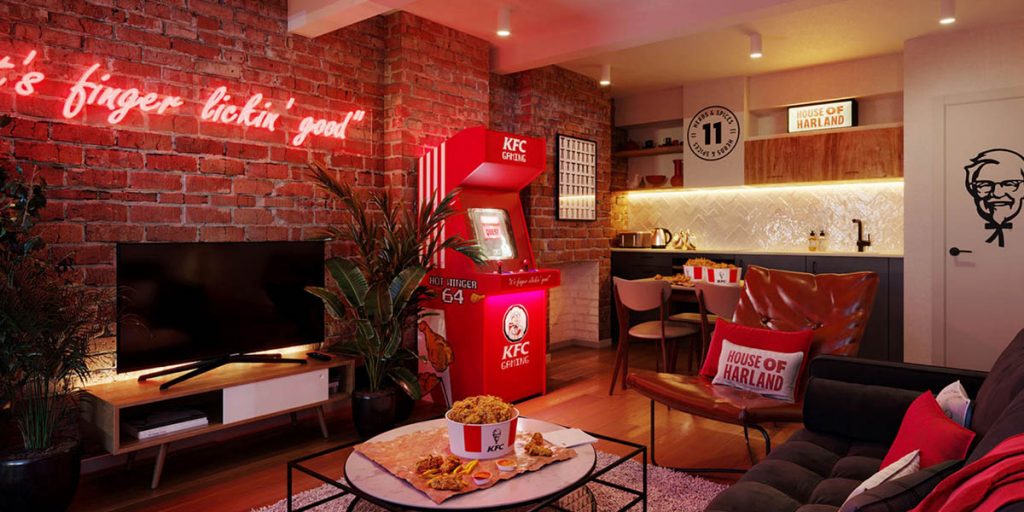 KFC will open a themed hotel in London called the House of Harland, per an announcement. The pop-up will be open from Aug. 18-29, with a total of six stays available via Hotels.com on Aug. 11 for £111 ($154) and proceeds being donated to The KFC Foundation.

Guests will be transported in a black Cadillac “Colonelmobile” from King’s Cross train station to the hotel, where they will be met by a “chick-in” clerk. The room includes botanical-infused self-care products, “chick-flicks” in a cinema room, a KFC arcade machine, and a button that activates a chicken concierge service.

The staycation experiential activation could help the brand engage with U.K. consumers who are unable to travel abroad due to the coronavirus pandemic. The campaign reported that the project was crafted with agency Freuds and with production support from Proud Robinson & Partners.

KFC’s House of Harland pop-up — named after founder Colonel Harland Sanders — is the latest in the restaurant chain’s long line of quirky marketing efforts. The experiential activation will allow a few U.K.-based consumers to have a brand-themed staycation, as coronavirus continues to upend international travel even as the country sees a drop in COVID-19 cases. While experiential has returned this year, marketers must continue to monitor the local effects of the pandemic when plotting activations.

According to the Hotels.com posting, an upmarket apartment near Brick Lane in London’s Shoreditch district, per the Hotels.com posting, the House of Harland brings together several other brand-themed elements that KFC has experimented with in the past. Self-care products could be infused with some combination of the chain’s signature herbs and spices, as the chain has made scented merchandise for years. The KFC Hot Winger Arcade Machine debuted earlier this summer and follows the brand’s previous gaming-focused device development. Similarly, the promise of “chick-flicks” evokes the brand’s Lifetime original movie, “A Recipe For Seduction.”

The pop-up also recalls a groundbreaking activation from its Yum Brands sister company, Taco Bell, which opened a branded hotel in one of 2019’s best campaigns. Like Taco Bell’s effort before it, KFC’s House of Harland seeks to engage with fans of the chain as it continues to establish itself as a lifestyle brand. Such lifestyle plays can help the marketer cut through the noise of traditional ads.

The U.K. campaign is one of the brand’s first in the country since promoting marketing director Jack Hinchliffe to CMO of KFC U.K. and Ireland in June after previous CMO Meg Farren announced plans to become chief customer officer at grocery chain Asda. The executive shuffle came months after KFC’s U.S. marketing chief Andrea Zahumensky — largely credited with helping to modernize the brand with edgy creativity — left the brand in April.

KFC International saw same-store sales grow 36% during Q2 2021, per Yum’s latest earnings report. Same-store sales, however, declined 1% on a two-year basis, partially a result of the impact of about 2% of stores being temporarily closed due to COVID-19 as of the end of the quarter.