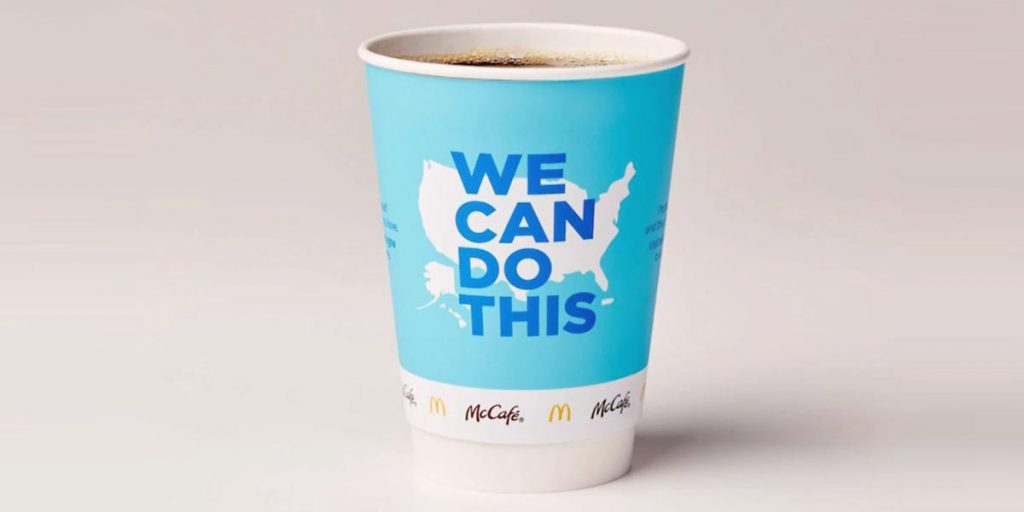 McDonald’s announced Tuesday that it’s partnering with the White House to promote the COVID-19 vaccines on the fast-food chain’s redesigned coffee cups.

The promotion will begin in July and US customers will see new McCafe cups and delivery seal stickers that feature the Department of Health and Human Services-created slogan, “We Can Do This.”

The cups will also direct customers toward vaccines.gov, which helps people find nearby appointments and provides vaccine safety information.

The public-private partnership comes as demand for the life-saving shots has begun to taper off in many parts of the country. More than 152 million people in the US, or nearly 50 percent, have gotten at least one shot of the vaccine, according to data from the Centers for Disease Control and Prevention. But experts increasingly say that the country is unlikely to vaccinate enough people to achieve herd immunity at which point the virus would be unable to spread in the community.

McDonald’s said the promotion will last several weeks and the slogan will be printed on roughly 50 million cups.

“McDonald’s is excited to be doing our part for the people we serve, providing them with simple information that can help keep them safe,” Genna Gent, McDonald’s US vice president for global public policy and government relations, said in a statement.

Xavier Becerra, the Health and Human Services secretary, said the promotion will help the federal government meet people where they are, getting them “trusted information about vaccines when they grab a cup of coffee or order a meal.”

“This effort will help more people make informed decisions about their health and learn about steps they can take to protect themselves and their communities,” he said in a statement.