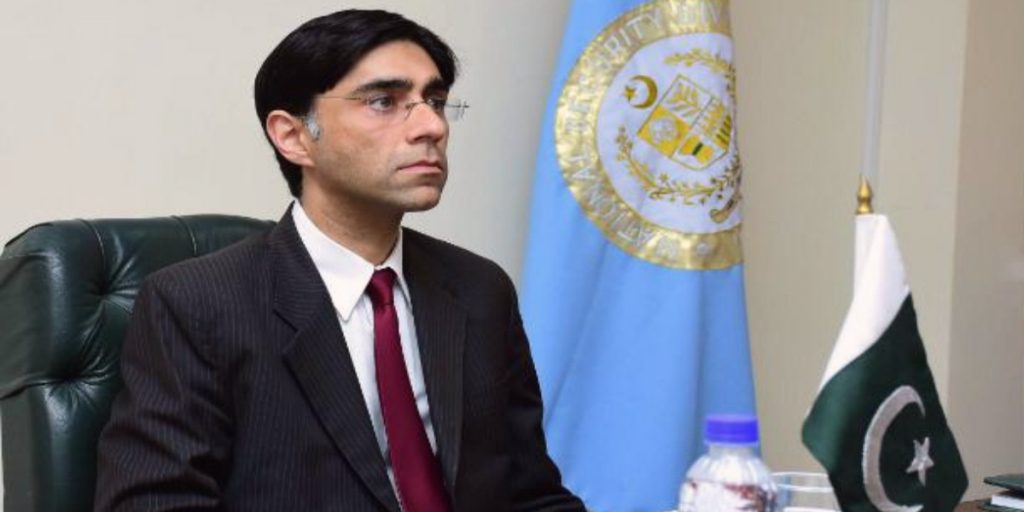 Seeking a “paradigm shift” in its ties with the US, Pakistan’s National Security Adviser Moeed Yusuf has presented to his American counterpart Jake Sullivan a blueprint to enhance bilateral relations not based on security and defence but focusing on economy and trade, according to a media report on Wednesday.

Yusuf, who was appointed as the National Security Adviser (NSA) this month, met Sullivan on Sunday in Geneva. In a first in-person high-level meeting, the Pakistani and the US NSAs held wide-ranging talks on the bilateral, regional and global issues of mutual interest.

Breaking from the past practice, Yusuf presented the Pakistani plan, seeking bilateral cooperation with the US not based on security and defence but economy, trade and business.

Sources familiar with the development told The Express Tribune that Pakistan is seeking a “paradigm shift” in its approach as far as ties with the US are concerned.

The relationship between Pakistan and the US has often been seen as transactional as Islamabad for long relied on the country’s strategic location for leverage with Washington.

Former US president Donald Trump had suspended all security assistance to Pakistan in January 2018, arguing that he was not satisfied with Islamabad’s cooperation and role in the fight against terrorism.

However, there has been a consensus among the policymakers that Pakistan needs to move away from geo-strategic to geo-economics. At an Islamabad Security Dialogue held earlier this year, Pakistan’s civil and military leadership talked about that shift.

In line with that approach, Prime Minister Imran Khan in March formed an Apex Committee that was tasked with formulating a new strategy on ties with the US under the Biden administration, the report said.

The Terms of Reference of the committee solely focused on finding ways and means to seek cooperation between Pakistan and the US in the fields of economy, trade, business, energy, technology, and climate change.

This is seen as a clear departure from the earlier approach adopted by Pakistan and the US that largely focused on security cooperation with Afghanistan.

Sources said Moeed went to Geneva with a blueprint’ envisaging Pakistan’s desire to broaden its relationship with the US beyond security cooperation and Afghanistan, according to the report.

Different ministries and departments made several proposals identifying potential areas of cooperation between Pakistan and the US.

The Board of Investment (BoI) has proposed to attract more US foreign direct investment in Pakistan, especially through technology firms. The BoI also seeks US investment through special incentive regimes.

The Ministry of Commerce has suggested that an American-Pakistan Economic Zone could be set up near Karachi port to allow reprocessing at concessional rates.

It has also proposed to enhance structured engagement through TIFA Ministerial Council and Business Opportunities Conference. Last time, the TIFA council meeting was held in May 2019. The US-Pakistan TIFA is the primary mechanism for both countries to discuss trade and investment issues and focus on ways to strengthen the bilateral relationship.

The United States continues to be Pakistan’s largest market for exports.

The Ministry of Commerce has also sought early finalization of proposed legislation on Reconstruction Opportunity Zones, which had been promised by the Bush administration in return for Pakistan’s support to the US war in Afghanistan.

However, it is not clear if the Biden administration is receptive to the idea given its strategic priorities and close ties with India. Also, close ties between Pakistan and China can be a major factor that may desist the US from seeking broader engagement with Pakistan, the report said.

It is believed that given the conversation, Pakistani authorities have had so far with the new US administration, Washington has linked future cooperation with Pakistan delivering on the Afghan peace process.

Unlike the past, this time the US does not want to give any incentives to Pakistan before the Afghan endgame. If there is a peace deal to the satisfaction of the US, there is a likelihood of Washington offering certain incentives to Islamabad on trade, economy, and other issues.