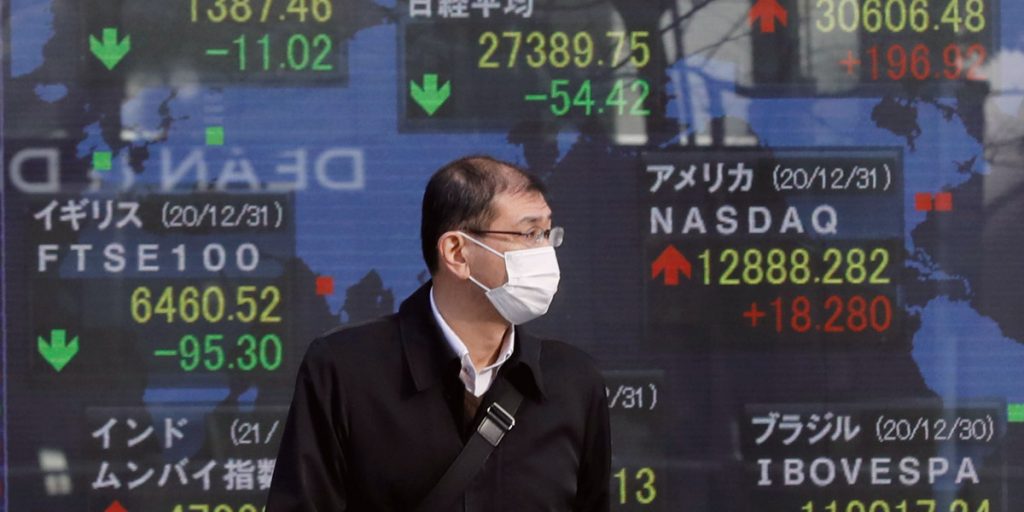 In Asia, a regional equity gauge suffered its biggest slide in nearly two months with MSCI’s broadest index of Asia-Pacific shares outside Japan down 1.6% in afternoon trade, its largest drop since late March. Japan’s Nikkei slid 3.16%.

Selling was heavy in Hong Kong, where the Hang Seng tech index fell 3% and dragged the broader market down nearly 2%. That followed a 2.55% fall on the Nasdaq overnight.

“Markets reversed course overnight as inflation fears drove investors away from growth stocks, notably the tech stocks, to pick cyclicals amid the momentum of the economic recovery,” said Hong Hao, head of research at BoCom International.

Soaring commodity prices that have sent the cost of raw materials from copper to iron ore and lumber to record heights are the latest indicator that inflation may not be as transitory as some policymakers seem convinced. U.S. breakeven rates scaled multi-year peaks, even as profit taking dampened commodities.

A host of Federal Reserve speakers this week will be closely watched by markets to assess how authorities are likely to respond to receding risks posed by the coronavirus in some major economies.

A test case on U.S. inflation will come this week when the Labor Department releases its latest consumer price index report on Wednesday.

“Inflation’s shadow looms large and we do think that there is a limit to the Fed’s tolerance of inflation,” DBS Bank strategists said in a note on Tuesday.

Elsewhere in Asia, Australia’s miner-heavy benchmark was down 1.05% while China’s blue-chip CSI300 index rose 0.45% in afternoon trade. Tech conglomerates Tencent and Alibaba dropped by more than 3% in Hong Kong. Food delivery major Meituan tumbled as much as 9.8% and has lost more than $30 billion in market value this week.

The retreat came after China’s top anti-trust regulator said on Friday that it would continue to promote rectification of internet companies.

Kelvin Wong, an analyst at CMC Markets, said investors and traders will not have a better picture of Chinese tech companies and their prospects until Beijing’s anti-trust probes finish.

“Alibaba got the hit first … There’s a bit of ongoing speculation about who’s going to the next one and how big the hit will be,” he said.

According to Jim McCafferty, head of equity research in Asia at Nomura, pressure on the sector as governments look to curtail big tech’s influence and find cash to foot the bill for stimulus spending was another factor weighing on the market.

In currency markets speculation that growing price pressure would erode the dollar’s value kept the U.S. currency near a 2-1/2-month low. By early Tuesday, the dollar index, which measures the greenback against six major currencies, had pared losses to stand at 90.216.

Oil prices gave up earlier gains as concerns that rising COVID-19 cases in Asia will dampen demand outweighed expectations that a major U.S. fuel pipeline could restart within the week following a cyber attack.

U.S. heating oil futures, which reflects prices for jet fuel and diesel, stood at 2.0071 a gallon.