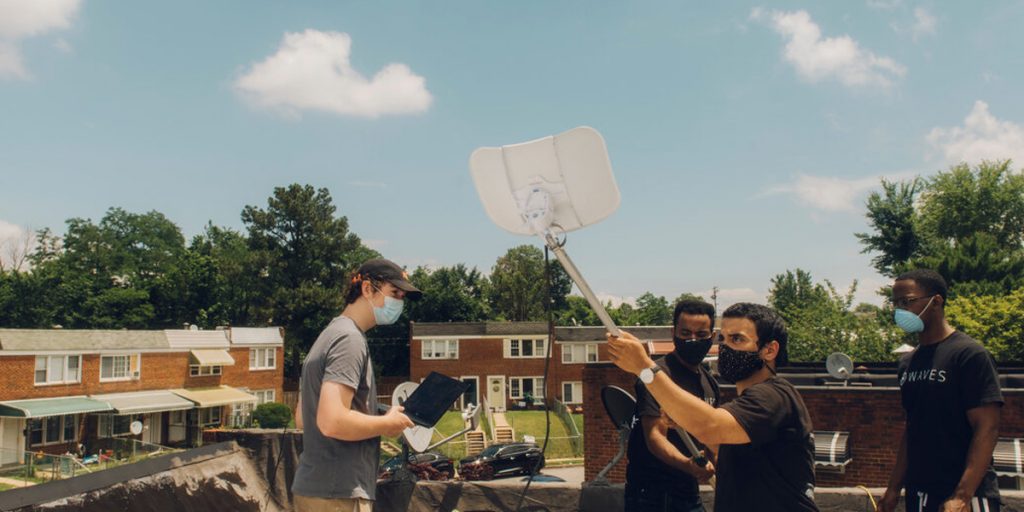 Kimberly Vasquez, a high school senior in Baltimore, faced a tough problem when the pandemic began. She had no fast internet service in her home, but all her classes were online.

Marigold Lewi, a sophomore at the same school, was regularly booted off Zoom classes because of her slow home connection.

Ms. Lewi spent a lot of time explaining Zoom absences to teachers. Ms. Vasquez sat outside local libraries to use their internet access and at times used her phone. The two of them helped push a successful public campaign for better and free service to low-income families in the city.

“It was very chaotic,” Ms. Vasquez said. “We had to do this because no one else was going to change things.”

A year after the pandemic turned the nation’s digital divide into an education emergency, President Biden, inheriting the problem, is making affordable broadband a top priority, comparing it to the effort to spread electricity across the country. His $2 trillion infrastructure plan, announced on Wednesday, includes $100 billion to extend fast internet access to every home.

The money is meant to improve the economy by enabling all Americans to work, get medical care and take classes from wherever they live. Although the government has spent billions on the digital divide in the past, the efforts have failed to close it partly because people in different areas have different problems. Affordability is the main culprit in urban and suburban areas. In many rural areas, internet service isn’t available at all because of the high costs of installation.

“We’ll make sure every single American has access to high-quality, affordable, high speed internet,” Mr. Biden said in a speech on Wednesday. “And when I say affordable, I mean it. Americans pay too much for internet. We will drive down the price for families who have service now. We will make it easier for families who don’t have affordable service to be able to get it now.”

Longtime advocates of universal broadband say the plan, which requires congressional approval, may finally come close to fixing the digital divide, a stubborn problem first identified and named by regulators during the Clinton administration. The plight of unconnected students during the pandemic added urgency.

Up on the Met Roof, an Artist Is Taking Big Bird to New HeightsYour Pandemic Baby’s Coming Out PartyMy Choice Isn’t Marriage or LonelinessContinue reading the main story

“This is a vision document that says every American needs access and should have access to affordable broadband,” said Blair Levin, who directed the 2010 National Broadband Plan at the Federal Communications Commission. “And I haven’t heard that before from a White House to date.”

Some advocates for expanded broadband access cautioned that Mr. Biden’s plan might not entirely solve the divide between the digital haves and have-nots.

The plan promises to give priority to municipal and nonprofit broadband providers but would still rely on private companies to install cables and erect cell towers to far reaches of the country. One concern is that the companies won’t consider the effort worth their time, even with all the money earmarked for those projects. During the electrification boom of the 1920s, private providers were reluctant to install poles and string lines hundreds of miles into sparsely populated areas.

There are also many questions about how the administration plans to address affordability. It is one thing to extend service to homes; it is another to make it inexpensive enough for people once it gets there. The White House was scant on details on Wednesday, though it stressed that subsidies alone were not a long-term solution.

In addition, the money would arrive more than a year after the pandemic closed schools and as many were starting to reopen their doors. As a result, many students without good internet connections have already fallen a full year behind.

Mr. Biden’s plan would be tested in places like Chinle, a school district in the Navajo Nation in northeast Arizona. As with electrification, the most remote homes — particularly on Native land — got service last. Today, many homes in that isolated corner of the state have no access to broadband or speeds that are so slow even one device on a Zoom conference takes up most of the bandwidth. Cellular phone service is nonexistent or spotty in many parts.

School is slowly beginning to return to the classroom. But until last week, 31 buses were sent out daily with packets of printouts for homework and flash drives with videos of lessons for math, science, history and English. The graduation rate is expected to be near 60 percent this year, down from 77 percent last year, said Quincy Natay, the superintendent of the Chinle Unified School District.

“It has been a tough and challenging year,” Mr. Natay said. “A lot of learning loss has occurred for this group.”

Congress has approved more than $10 billion in the past few months to help make broadband more affordable and to put more laptops and other devices in students’ hands. Of those funds, the F.C.C. is working to figure out how to distribute $7.2 billion for broadband service, devices, and potentially routers and other equipment for households with school-age children.

In February, the F.C.C. announced $50 to $75 broadband subsidies for low-income families from $3.2 billion granted by Congress in December for emergency digital divide funding. Both programs involve one-time emergency funding to address broadband access problems exacerbated by the pandemic.

The administration’s $100 billion plan aims to connect even the most isolated residents: the 35 percent of rural homes without access. In those areas, the White House said, it would focus on “future-proof” technology, which analysts take to mean fiber and other high-bandwidth technology. The administration highlighted its support for networks run and owned by municipalities, nonprofits and rural electrical cooperatives. Several states have banned municipal broadband networks, and the F.C.C. failed in its attempts to overturn those bans in court during the Obama administration.

The Biden infrastructure plan faces a tough path in Congress. Republicans have pushed back on the cost. They even argue about definitions of broadband. Republicans balk at some proposals to require faster broadband standards — such as 25 megabits for downloads and as much as 25 megabits for uploads, which they say is a bar too high for providers in rural areas. Those speeds would allow multiple family members to be on videoconferencing, for example.

“I believe that this would make it harder to serve those communities that don’t have broadband today,” Michael O’Rielly, a former F.C.C. commissioner, told the House commerce committee last month.

Educators lobbied Congress throughout the pandemic to extend broadband in the country. When little relief was in sight, some took matters into their own hands.

Last April and through the summer, administrators at the Brockton School District in Massachusetts bought more than 4,000 hot spots with their own funding and a federal loan. They were able to reduce the percentage of students without high-speed internet or a device to about 5 to 10 percent, from about 30 percent.

Superintendent Mike Thomas said the district was starting to go back to classrooms and would most likely be fully in person by the fall. But he plans to retain many aspects of distance learning, he said, particularly after-school tutoring.

In Baltimore, where an estimated 40 percent of households lack high-speed internet, students and community activists fought to raise awareness of their circumstances. Ms. Vasquez and Ms. Lewi held protests against Comcast, the dominant provider, for better speeds and lower costs for its much-publicized low-income program. Their group, Students Organizing a Multicultural and Open Society, also lobbied the Maryland legislature and the city to put a priority on affordable broadband for low-income households.

“We didn’t have options, and we deserved better,” Ms. Vasquez said.

Adam Bouhmad and some community activists began to install antenna “mesh” networks tapping into the hot spots of closed Baltimore schools to connect surrounding homes. Through a jury-rigged system of antennas and routers, Mr. Bouhmad’s group, Waves, got cheap or free internet service to 120 low-income families.

Mr. Biden’s promise to support alternative broadband providers could include projects like the one led by Mr. Bouhmad, who said the past year had shown how scant broadband options had left residents in Baltimore in the lurch.

“Investment upfront to build out infrastructure and support internet providers is fantastic,” Mr. Bouhmad said. He added that residents in places like Baltimore would continue to need federal subsidies and that the administration should focus on the costs of broadband as a major hurdle.

“Availability doesn’t equal accessibility in terms of price and user experience,” he said.