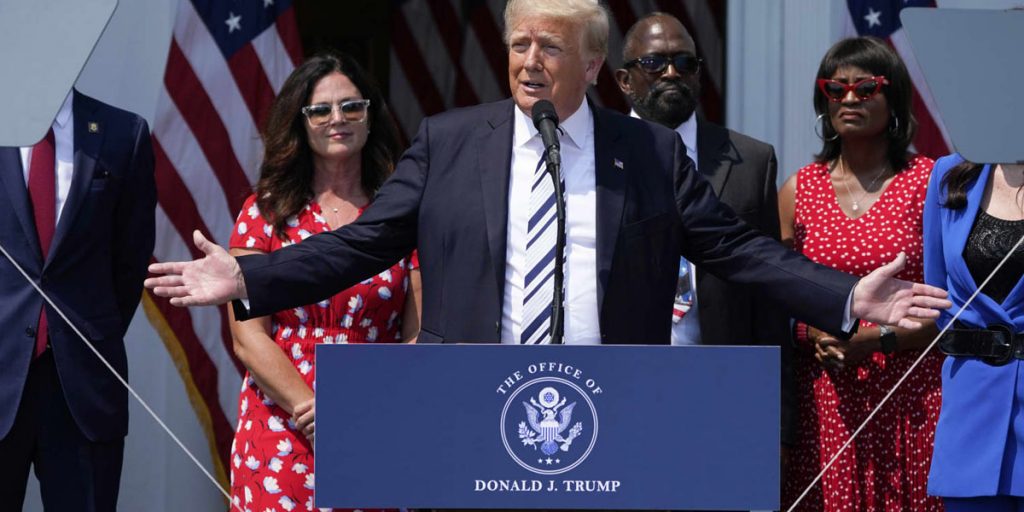 Former President Donald Trump took his fight with three massive tech companies to court, filing lawsuits that legal experts say are all but guaranteed to fail – even as they rally Republican voters, fundraisers and donors.

Trump revealed Wednesday that he is suing Facebook, Twitter and Google, as well as their respective CEOs Mark Zuckerberg, Jack Dorsey and Sundar Pichai, in class-action lawsuits.

Trump, who has a history of threatening legal action but not always following through, made the announcement at his golf club in Bedminster, New Jersey, alongside two leaders from the America First Policy Institute, the pro-Trump nonprofit group that is supporting the lawsuits.

Shortly after the news conference wrapped, Trump’s political entities started sending out fundraising messages that touted the lawsuits in their appeals for money. One such text message, written as if it were coming from Trump himself, includes a link to his joint fundraising committee Save America, which also raises money for other Republican political initiatives.

The lawsuits were unveiled just over a month after Facebook decided to uphold Trump’s ban from using the platform until at least January 2023. Twitter, Trump’s preferred social media outlet throughout his one term in office, permanently banned him on the heels of the Jan. 6 invasion of the Capitol by a mob of his supporters.

As president, Trump railed against Section 230 and repeatedly called for its repeal. He even tied the issue to a crucial round of stimulus checks at the height of the coronavirus pandemic, as well as the passage of an annual defense spending bill.

“I think the lawsuit has almost no chance of success,” Vanderbilt University law professor Brian Fitzpatrick told CNBC in a phone interview.

The tech platforms are private entities, not government institutions, and therefore the plaintiffs’ claims about constitutional violations do not hold up, Fitzpatrick said.

The professor added that he was unconvinced by the argument in the lawsuits that the companies should be treated like government, because their conduct, including alleged coordination with then-President-elect Joe Biden’s transition team, “amount[s] to state action.”

“I think this is just a public relations lawsuit,” Fitzpatrick said, “and I’ll be honest with you, I wouldn’t be surprised if it ends with sanctions against the lawyers for filing a frivolous lawsuit.”

Trump’s spokeswoman, Liz Harrington, declined to comment ahead of the former president’s speech.

The attorney representing Trump in the lawsuits, Matthew Lee Baldwin of Vargas, Gonzalez, Baldwin, Delombard, did not immediately respond to questions from CNBC about how many suits Trump planned to file, and whether these suits have all been filed in court yet or not.

Wall Street seemed largely unfazed by the news, as shares of Facebook and Google-parent Alphabet outperformed the S&P 500 and Nasdaq Composite.

The announcement comes on the same day that The Guardian newspaper in the U.K. reported that the upcoming book “Frankly, We Did Win This Election” claims that Trump praised Adolf Hitler to his then-chief of staff John Kelly. Trump allegedly said, “Well, Hitler did a lot of good things.”

Trump denied he said it, according to the book’s author, Wall Street Journal reporter Michael Bender, the Guardian said.

Harrington in a statement to NBC News said the reporting “is totally false. President Trump never said this. It is made up fake news, probably by a general who was incompetent and was fired.”