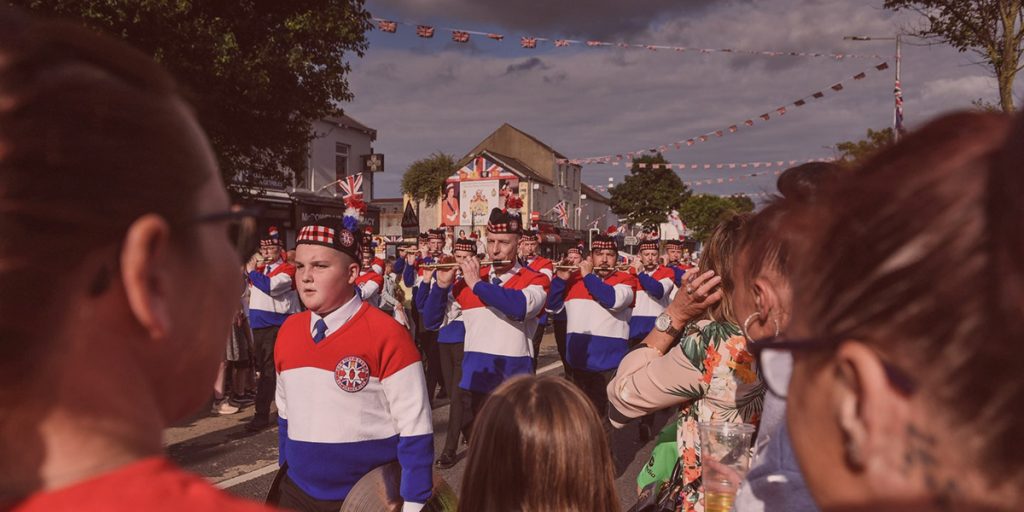 It’s a rainy evening in West Belfast and three young children are taking turns to jump through a hopscotch course drawn in white chalk on the street. An expanse of slate grey concrete looms above them, along with dark green corrugated iron topped with wire mesh.

Erected in the late 1960s amid the onset of the violence that blighted Northern Ireland for three decades, the reinforced 20-foot fence separates the largely Catholic residents from the Protestants on the other side. Gates at the “peace walls” dividing the communities are typically shut from early evening until early morning.

Britain’s departure from the European Union has exposed fault lines across the U.K. and no more so than Northern Ireland. Brexit highlighted the often violent split between pro-U.K. unionists and nationalists wanting to unite the island of Ireland. Beyond the fences, murals and images of confrontation now a century since partition, the traditional divisions are looking more blurred.

There’s a growing phalanx of people who no longer identify as strongly with either side. They will ultimately decide where one of Europe’s most inflammable regions goes next. It’s a journey that will resonate in London, where the U.K. government is still figuring out how Brexit will work in Northern Ireland, and Dublin, where any push for reunification would lay bare its financial cost.

A visit to Belfast in July is a stark reminder of a troubled history. This is the time when large bonfires and marches are held across Northern Ireland to commemorate the victory of King William of Orange in the 1690 Battle of the Boyne. But people interviewed from both sides of the divide say there’s an urge to break with the political culture of stalemate.

Mary Devlin is the bar manager at St Matthew’s Sports and Social Club in the Short Strand area of East Belfast, a traditional Catholic enclave. She votes for nationalist party Sinn Fein, but said its goal of a united Ireland is “not really important” to her nor her adult children. Their priorities are education and a better economy, not constitutional politics, she said.

“A united Ireland? Probably one day,” said Devlin, 49. “But I’d just like for the two communities to live as one, just in peace—live and work in peace.”

Alan McNeill, 46, a Protestant who lives and works along Shankhill Road, said he was frustrated with the politicians in Northern Ireland’s power-sharing assembly. He pointed to the social conservatism in unionism that’s become out of sync with both the rest of the U.K. and Ireland.

“There’s an old-style dinosaur approach on gay marriage, same-sex marriage, the legalization of abortion,” McNeill said of the Democratic Unionist Party, the largest pro-U.K. group. “Society has moved on in the last 40 years. It should be about progressing politics and the betterment of people’s lives as opposed to just the old issues being pulled up again.”

Such sentiment exposes an underlying disillusionment that poses a risk to the competing forces seeking to reassert Northern Ireland’s place in a fractious U.K. or make the case for a potential future in a united Ireland.

The Northern Ireland Life and Times Survey on political attitudes in the region run by ARK, a joint initiative between Queen’s University Belfast and Ulster, showed an overall trend away from people who identified as either unionist or nationalist. Almost two-thirds of respondents said they didn’t consider themselves a supporter of any political party.

“We’re seeing a higher number of people who don’t see the question of unionism or nationalism as relevant,” said Katy Hayward, the study’s lead researcher.

Indeed, any process for reunification may be years if not decades away. Under the terms of the peace agreement, only the U.K.’s Secretary of State for Northern Ireland can call a vote on Irish reunification and then only if it appears “likely” a majority there would back it.

Some 44% of Northern Irish voters are against unification and 35% are in favor, according to a survey for the Irish Independent in May. That leaves a swathe of undecideds who could swing it either way.

Then there’s the question of the Irish Republic. Consent for reunification is required on both sides of the border. While polls show two-thirds of people in the Republic would support a united Ireland, it’s not a given they would back it in a vote, according to Diarmaid Ferriter, a professor of modern Irish history at University College Dublin. He pointed to issues of economic cost and social differences.

“There are a lot of people in the Republic who consider Northern Ireland to be a foreign country, politically and culturally,” he said.

For now, there’s a sense that the biggest unionist group is on the back foot. A recent poll showed support for the DUP has dropped to 16%, neck-and-neck with the centrist, pro-EU Alliance party. Sinn Fein drew 25% support. Elections to the assembly in Belfast, which was born out of the 1998 Good Friday Agreement that largely brought peace to the region, are due in May next year, though could be triggered earlier.

The DUP replaced its leader for the second time in a month in June after Northern Irish First Minister Arlene Foster quit. The more moderate Jeffrey Donaldson took over from Edwin Poots, who lasted three weeks in the post. Poots has drawn attention for his view that the world is only 6,000 years old and attempted to challenge a court ruling allowing gay and unmarried couples to adopt children.

“Unionism is suffering a major identity crisis, probably one of the biggest identity crises it’s had in 25 years,” said Peter Cardwell, a former special advisor to two U.K. Northern Ireland secretaries. “That doesn’t necessarily lead immediately to a united Ireland, but it does lead to people totally re-evaluating all the relationships we have within these islands and with the EU.”

But first, the problem for region of just under 2 million people as it plots its next course is evident. “People don’t know what they want,” he said.

Chloe, a 37-year old banking official who was watching a march go by—as her family have done for generations—said mainstream politics no longer resonate with younger people. They are more focused on jobs, housing, drug abuse and mental health. “I think there has to be a massive change, and for people to break away from the DUP and Sinn Fein,” she said.

The pandemic has hit an already more fragile economy. Per-capita gross domestic product in Northern Ireland is about 20% lower than the U.K. average, while a June report showed it had the highest level of economic inactivity of any region.

On paper, Northern Ireland could have the best of both worlds: part of the U.K and access to the EU’s single market via its seamless border with the Irish Republic.

The most recent economic survey from the Northern Ireland Chamber of Commerce and Industry found 67% of the over 200 members surveyed believe Northern Ireland’s status post EU exit presents opportunities. Ann McGregor, chief executive of the chamber, said all the region needs now is a stable administration to help foster them.

The issue is the Northern Ireland protocol part of the Brexit divorce deal. That effectively puts a customs border in the Irish Sea and treats the region differently from the rest of the U.K. and has irked some in the unionist camp.

Riots in April saw petrol bombs thrown and a bus set on fire on Shankhill road, just minutes from where the children were playing hopscotch. It thrust Northern Ireland back into the international spotlight, with a standoff over regulations governing the export of chilled meat products, dubbed the “Sausage Wars” by local media. The spat between Britain and the EU spilled into June’s Group of Seven summit.

Ultimately, whatever direction Northern Ireland chooses to go in, stability will be key, said Heather Wilson, 30, a Protestant who grew up in a unionist family and now represents the SDLP, a nationalist party. She would like to see a united Ireland, though not at all costs.