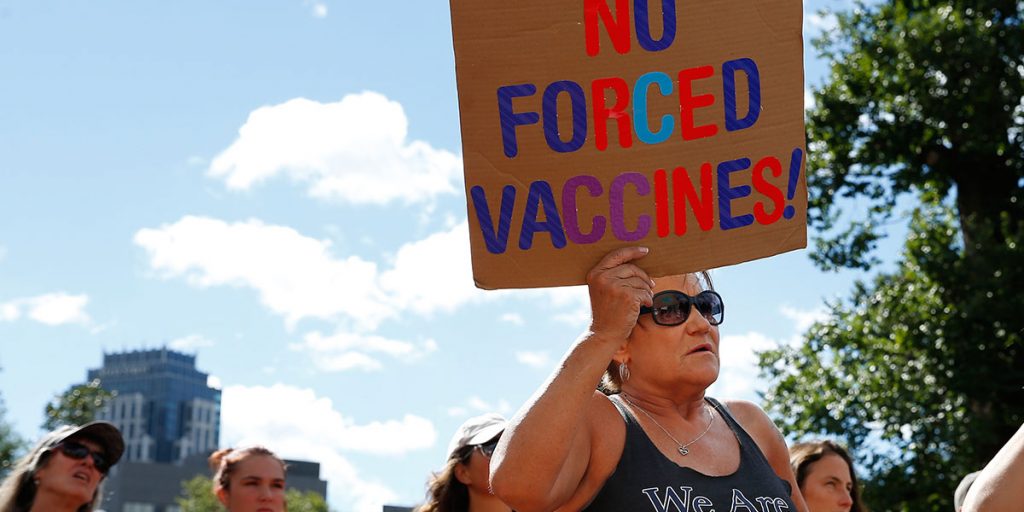 A business group representing wholesalers told President Joe Biden that jobs will be lost if he follows through with requiring companies with federal contracts to have their employees vaccinated.

Eric Hoplin, president and CEO of the National Association of Wholesaler-Distributors, laid out the case against the mandates and urged the president to back off his edict in a three-page letter. He said that if the contractor rule is implemented, thousands of workers will be laid off and the supply chain problems will grow far worse.

“NAW urges that the Executive Order’s implementation be revised to avoid this calamity and provide alternatives to promote safety, including testing, and consider a short-term delay to provide time to carry out these changes and to avoid further supply chain disruptions in the coming months,” he wrote.

The business group represents more than 30,000 employers across the country, some of which provide products and services to the federal government.

Hoplin said NAW and its member companies are not opposed to the COVID-19 vaccines and have encouraged employees to get inoculated. He said, though, that there is a small segment of the workplace that refuses to get vaccinated.

The letter warned that if the executive order is implemented as written, then “thousands of valued employees will be forced out of their jobs shortly before the holidays, the already compromised supply chain will be under added pressure during the busiest time of the year, and the already tight labor market will make it immeasurably more difficult to replace laid-off employees, compounding supply chain disruption.”

The country’s supply chains are already in disarray. Dozens of ships have been seen queued up outside of ports, some purchases are taking months to be delivered, and warehouses are overloaded and understaffed. The NAW contends that some of the workers who might quit because of the mandate are crucial to helping stymie supply chain issues and that their departure will further exacerbate the problem just as Christmas looms large.

In the letter to Biden, Hoplin pointed out that the mandate could affect lower-income workers. Several NAW companies have also reported that the employees who said they will resist taking the vaccine are disproportionately minorities.

The White House maintains that the mandate will not result in mass firings. NAW said it fears that employees will have no problem leaving to work at another company.

About 4.3 million workers quit their jobs in August, a figure that is up from 4 million in July. The number of people quitting is the highest since the United States began keeping records of the statistic about two decades ago and is equivalent to about 3% of the country’s workforce. Additionally, nearly 20 million people have quit since April.

Hoplin said member companies have offered generous incentives for their employees to get vaccinated, including $1,000 checks, paid days off, gift cards, and free vacations to Las Vegas. Despite the overtures, some of the employees have said directly and unequivocally that they would rather be fired than vaccinated, he said.

Dec. 8 is the deadline for employers with federal contracts to have their employees vaccinated.

“If tens or hundreds of thousands of employees are terminated just two weeks before Christmas — including the employees of the NAW companies which ensure the movement of products through the supply chain — the result could be nothing short of catastrophic for the newly unemployed and their families, and for the US economy,” Hoplin told Biden.

He suggested amending the executive order to delay its implementation or to add a testing option as is included in another vaccine mandate promulgated by the president. Biden ordered that private businesses with more than 100 employees also have their workers be vaccinated, but if they refuse, they can present weekly negative COVID-19 tests and remain on the job.