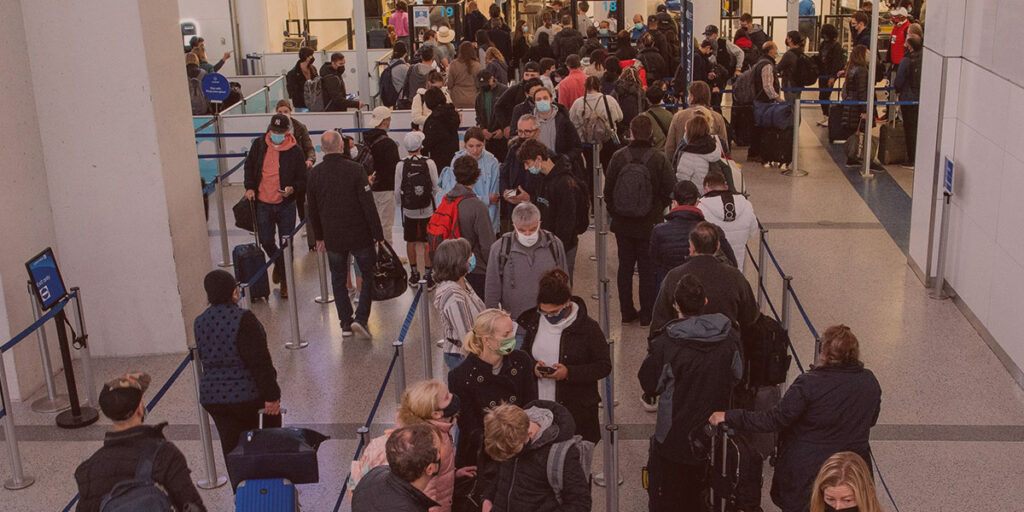 President Joe Biden’s latest measures to limit the spread of COVID-19 will increase the hassle factor of flying into the United States, even for American citizens returning from overseas.

Beginning next week, travelers heading to the U.S. will be required to show evidence of a negative test for the virus within one day of boarding their flight. The previous period was three days.

Also, Biden will extend the federal rule requiring passengers on planes, trains, and buses to wear face masks through March 18. It was scheduled to expire in mid-January.

Those proposals came about quickly, underscoring the urgency for the White House to act ahead of winter when the virus can spread more easily among people indoors, and since the discovery of a worrisome new variant of COVID-19. The first U.S. case of the omicron variant was discovered in California and reported by the administration Wednesday.

The administration’s moves come just days after the White House announced a ban on travel to the US by foreign nationals who have been to South Africa or seven other African countries within the previous 14 days. That travel ban does not apply to U.S. citizens and permanent residents.

More telling, perhaps, is what’s not included in Biden’s announcement, including some proposals that were floated earlier this week like new quarantine rules for people arriving in the U.S. from overseas, which travel industry officials said would have been highly disruptive.
White House press secretary Jen Psaki was asked why the administration didn’t go further and require vaccination or a negative test for passengers on domestic flights. She replied that “nothing is off the table”.

“We base our decisions on the advice of the health and medical experts, what is going to be most effective and what we can implement,” Psaki said.

“The president takes their advice and counsel very seriously, but I would say there are discussions about a range of options every day.”
Here is a rundown of the new requirements and their likely impact.

Testing before flights to the US

The White House said that early next week, the United States will begin requiring all inbound international travelers to test for COVID-19 within one day of their flight to the U.S., regardless of their nationality or vaccination status. That will replace a similar three-day requirement in effect since early November when the administration scrapped country-specific travel bans.

“This tighter testing timetable provides an added degree of protection as scientists continue to study the omicron variant,? Biden said during a brief appearance to announce his latest measures against the virus.

Scott Keyes, the founder of travel site Scott’s Cheap Flights, said the shorter time to get tested will weaken demand for international travel by both Americans going abroad and foreigners coming to the U.S. He said, however, that the hassle was somewhat offset by other terms set by the White House, including allowing the use of rapid antigen tests instead of requiring more costly PCR tests, and directing insurance companies to cover the cost.

The U.S. Travel Association said it hopes the one-day window is temporary “until more is learned about the omicron variant”.

The Transportation Security Administration will extend the requirement to wear a mask on planes, trains, subways, and other public transportation including airports and bus terminals through the winter. Fines, which were doubled earlier this year, will remain in a range of $500 to $3,000.

The mask rule has become a flashpoint on flights, and some in the airline industry are eager to see the mandate go away. Airlines have reported more than 5,000 incidents of unruly passengers to federal authorities since the start of the year, with about three-fourths of the events involving passengers who refuse to wear a mask.

WHAT’S NOT IN THE NEW RULES

Administration officials considered other requirements including testing international travelers after they arrive in the U.S. and requiring all travelers “even American citizens” to quarantine for several days even if they test negative for COVID-19.

Kevin Mitchell, the founder, and chairman of the Business Travel Coalition said the items in Biden’s announcement aren’t big problems.

“One idea that was floated, that you might have had to quarantine –that would have been a problem,” Mitchell said.

“It’s a relief to the entire travel and tourism world” that quarantines were not ordered.

Airline stocks, which have been volatile since news broke about the omicron variant, rose between 6% and 9% in trading Thursday afternoon.

“That tells me people are wary, they are taking a wait-and-see approach to international travel because they want to see what the scientists conclude about this omicron variant, but domestic travel has been mostly unaffected,” Keyes said.