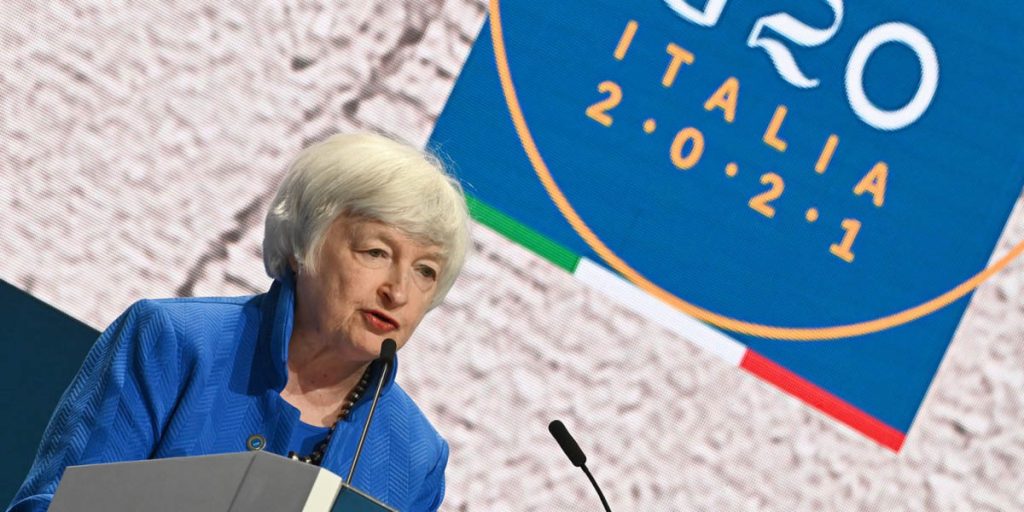 U.S. Treasury Secretary Janet Yellen will press European Union officials in Brussels this week to reconsider their plan to propose a digital levy after securing the Group of Twenty’s endorsement for the principles of a global corporate-tax agreement.

Yellen is in Brussels Monday and Tuesday following the gathering of G-20 finance ministers and central bankers in Venice, which concluded Saturday with the group’s call to finish work on the global plan’s details by October.

The Treasury chief is set to make the case for the EU to hold off on unveiling its plan for a bloc-wide digital levy on online sales. The European Commission, the EU’s executive arm, has delayed the rollout until July 20 amid pressure to withdraw it or show that it’s compatible with the global effort on how and where to tax the profits of multinational companies.

Some European officials are considering a further postponement of any digital-levy proposal until the fall, according to people familiar with the plans.

Asked Sunday if the planned levy would violate the global deal, Yellen avoided a direct answer but signaled the U.S. is not satisfied with the EU’s justification for it.

“It’s really up to the European Commission and the members of the European Union to decide how to proceed,” she said. “But those countries have agreed to avoid putting in place in the future, and to dismantle, taxes that are discriminatory against U.S. firms.”

The global deal is designed to stop major corporations from moving to low-tax jurisdictions and to establish a fairer system for distributing the taxation rights on multinationals, based on where they operate instead of where they are headquartered.

While EU officials haven’t finalized the plan for the bloc-wide levy, they have said its name is misleading and it wouldn’t qualify as a DST.

“I really think we can fix the issue, we can alleviate the difficulties,” French Finance Minister Bruno Le Maire said Saturday. “There are solutions and I’m sure that the European Commission will do its best efforts to find solutions with the American administration.”

After agreeing to jointly issue 750 billion euros of debt to pay for the recovery from the Covid pandemic, the EU is preoccupied with finding new resources to finance the plan. The idea of a digital levy is just one of the options, which could also include a plastic packaging tax.

Yellen will sit down with the bloc’s digital chief, Margrethe Vestager, whom she has already lobbied on the tax issue. When asked last week about U.S. pressure to drop the digital levy, Vestager expressed resistance.

“The discussions that we have in Europe about own resources to fund the recovery and resilience plan eventually – these are for us and we will have those discussions internally in the commission as to how to deal with it,” she said.

So far, 132 countries and jurisdictions have backed the two-part global plan. Over the weekend Yellen, along with her counterparts from Germany and France, each expressed confidence that the proposed global tax deal can overcome political obstacles in Washington and within the European Union in time for it to be finalized in October.

Yellen said she’s “very optimistic” that the U.S. Congress would pass legislation this autumn needed to implement the part of the deal calling for a minimum corporate tax rate of at least 15% across countries. She also said she hoped that Congress could address the portion of the deal dealing with the redistribution of tax rights as soon as spring of 2022.

European leaders face their own internal fights to get the agreement adopted across the 27-member bloc. Ireland, Hungary and Estonia have so far refused to sign up to the minimum tax, creating a potential roadblock because of the need for unanimity on tax issues within the EU.

The EU commission is working on a directive to implement the global tax deal and German Finance Minister Olaf Scholz has expressed optimism the three countries will eventually back the deal. They are opposed to an effective minimum tax of 15%.

Yellen will meet with Paschal Donohoe, finance minister of Ireland, while in Brussels.

Donohoe, who is also president of the Eurogroup of euro-zone finance ministers, said earlier this month that the nation isn’t yet ready to agree to a global minimum tax rate of at least 15%, though he intends to hold a public consultation in the country on the draft agreement. The government also pledged to “constructively engage” in the tax discussions. Ireland is among nations that have used low business taxes as a key economic development strategy.